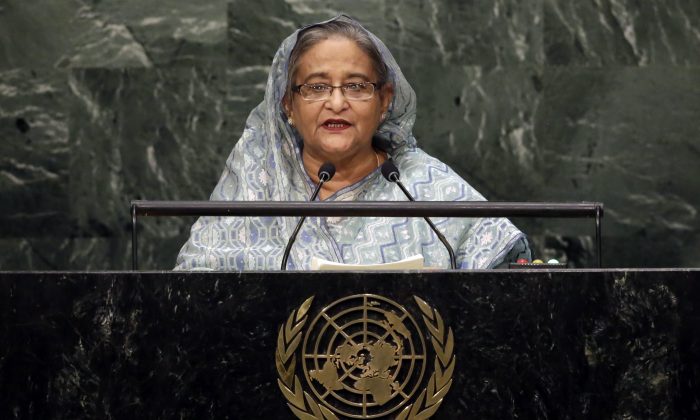 With a series of attacks and no crackdown on extremism, Bangladesh retreats from its secular, democratic beginnings

The Islamic State and other forms of fundamentalism are on the rise in the country of 156 million. Unfortunately, neither of the two major political parties, the professedly secular Awami League (AL) and the more religiously inclined, right-of-center Bangladesh Nationalist Party (BNP), has demonstrated any interest in containing these developments.

This mostly poverty-stricken nation has, thanks to massive infusions of foreign assistance as well as the dramatic growth of non-governmental organizations, made significant dents on child mortality and maternal health. Despite these laudable achievements, its record in guaranteeing the rights of religious, ethnic, and other minorities is abysmal.

US Fears Rise of Jihadists in Moderate Bangladesh

How Big a Threat Is ISIS in Central Asia?

Worse still, the present regime, in denial about religious extremism, finds this trend to be politically expedient. The ostensible need for sweeping powers to curb such religious violence enables the regime to further aggrandize its political power.

If extremist movements are not curbed, Bangladesh could well become an epicenter for Islamic radicalism.

Given its proximity to other substantial Muslim populations in both South and Southeast Asia, the emergence of such religious extremism could have profound destabilizing consequences well beyond the reaches of the country.

Growth of bigotry and violence in Bangladesh could have major spillover effects in the region.

Both Southeast and South Asia have had brushes with religious zealotry, and growth of bigotry and violence in Bangladesh could have major spillover effects.

In the region, especially in the adjoining states of West Bengal and Assam in India, the tides of religious extremism could encourage Muslim and Hindu radicals alike. Muslim zealots may feel encouraged to press their parochial agendas.

In turn, their Hindu counterparts could highlight their rise and promote their own violent programs.

Unfortunately, it appears that despite professedly secular and democratic credentials, the current Bangladeshi regime of Sheikh Hasina Wajed is at least tacitly allowing such zealotry to flourish.

In considerable part, willingness to dally with these extremists stems from an attempt to marginalize the organized religious party, the Jamaat-i-Islami, which is politically tainted owing to the association of several of members with the 1971 genocide.

Indeed in early May, the government sent a Jamaat leader, Motiur Rahman Nizami, to the gallows for alleged involvement in the killing of fellow Bengalis during the civil war.

The attacks on free thinkers are well-documented and number in the dozens. A few salient examples should be cited.

One of the most recent incidents involved the murder of Rezaul Karim Siddique, a teacher of English at Rajshahi University. The Islamic State (ISIS) claimed responsibility for his killing on the grounds that he was an atheist.

Locals claimed that he was not killed owing to his lack of religious convictions and instead argued that he was a victim because of his support for various cultural activities, especially musical soirees, an anathema in the austere version of Islam that ISIS seeks to promote.

In April, a prominent gay rights activist and a member of the editorial board of the magazine Roopbaan, Xulhaz Mannan, was hacked to death at his Dhaka apartment. Once again ISIS extremists took responsibility for his killing while local police authorities attributed the murder to local militants.

The attacks on free thinkers number in the dozens, and religious minorities are also under siege.

Religious minorities are also under siege. In February of this year after a series of attacks on Hindu temples, a priest, Jogeshwar Roy, was killed while organizing prayers at a local temple in Deviganj, a town a few hundred miles north of Dhaka. Once again ISIS claimed responsibility. The government, yet again, attributed his death to local militants.

In May a 75 year-old Buddhist monk was hacked to death in his temple in Cox Bazar. Though no evidence is readily available, this incident could have been spurred because of a spate of attacks that Buddhist monks have launched against virtually stateless Rohingya Muslims in neighboring Burma.

Sheikh Hasina has publicly decried these tragic incidents with various qualifications. At least on one occasion, in the aftermath of the killing of two self-declared atheist professors, she stated: “If anybody thinks they have no religion, OK, it’s their personal view… But they have no right to write or speak against any religion. … When you are living in a society, you have to honor the social values, you have to honor others’ feelings.”

Her reluctance to unequivocally condemn these horrific attacks and the perpetrators is fraught with political significance. The country’s current political context helps explain such ambivalence.

Despite the trappings of democracy, the country is steadily lurching towards authoritarianism in many ways.

In 2014, the Awami League won an overwhelming parliamentary majority as the principal opposition, BNP, had chosen to boycott the elections.

Since then the party of Sheikh Hasina has relentlessly harassed the opposition and its supporters. This includes lodging cases of sedition against the party’s leader, Begum Khaleda Zia.

Violent clashes between followers of the two parties have become all but routine.

The opposition has, for all practical purposes, been decimated, the freedom of the press is under widespread attack, the judiciary mostly pliant with police forces largely politicized.

Against this distressing political backdrop, Sheikh Hasina has attempted to consolidate her power, evincing an unwillingness for a swift crackdown on the fanatics.

Some astute political observers argue that her reticence is actually part and parcel of a strategy to undermine an already anemic opposition.

A more insidious development, however, has been the administration’s attempt to muzzle Bangladesh’s normally feisty press.

Anam now faces 79 cases in various courts owing to his admission that he published a possibly erroneous allegation about corruption in Sheikh Hasina’s government.

The government has also lodged charges against Shafik Rehman, the editor of a noted Bengali monthly, because of his putative involvement in an unlikely plot to abduct and kill Sheikh Hasina’s son in the United States.

The attacks on the press, in no small measure, are possible because of a sweeping piece of legislation—the Information, Communication, and Technology Act—first passed in 2006 and amended in 2013 with more draconian provisions, some so vague that the government now assumes extraordinary powers of prosecution.

Indeed, the scope is such that it was used to incarcerate an electronic shop owner, Tonmoy Malick, for selling a recording of a song that parodied both Sheikh Hasina and her father, Sheikh Mujibur Rehman.

The regime may well assume that the risks inherent in its tacit toleration of religious extremism, whether local or international, are manageable and useful.

Sheikh Hasina may have concluded that she can coopt fundamentalists to further marginalize the already weakened BNP and its allies.

However, the experiences of other leaders, for example, Indira Gandhi and Sant Jarnail Singh Bhindranwale in India, or various Sri Lankan politicians and the Buddhist clergy in Sri Lanka who have sought to harness religious bigots to pursue political ends suggests the contrary.

Religious dogmatists, especially those that embrace violence, have their own agendas. Given free rein, they work to expand the ambit of their activities and often return to haunt those who gave them leeway in the first place.

Bangladesh was initially created as a democratic and secular state. It has gone through the vicissitudes of military rule, witnessed a shrinking of its democratic space, and now sees a frontal assault on its secular ethos.

If the regime continues to flirt with Islamists, it may not only ring the death knell of the country’s fragile democracy and secular traditions, but worse spread the virus of extremism into India and as far as Thailand and Malaysia.

Sumit Ganguly is a professor of political science, holds the Rabindranath Tagore chair in Indian cultures and civilizations at Indiana University–Bloomington, and is a senior fellow at the Foreign Policy Research Institute in Philadelphia. Copyright © 2016 YaleGlobal and the MacMillan Center. This article was originally published on YaleGlobal Online.