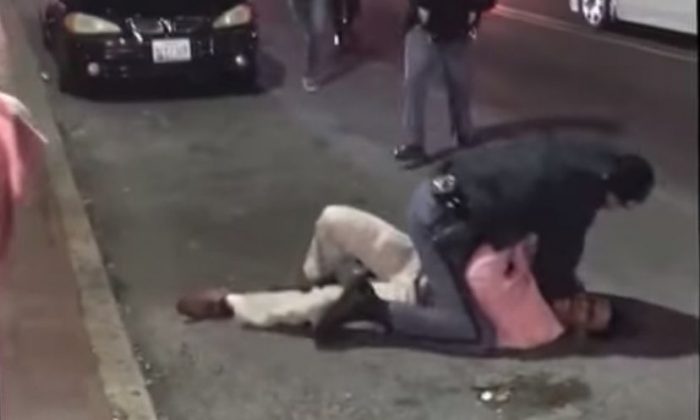 Baltimore County police said they will review the arrest of a 19-year-old man outside a bar in Towson, Maryland, according to reports on Tuesday.

A video showed officers taking him to the ground while apparently punching him a few times in the face.

Officials said that Zachary C. Blumenstein of Chevy Chase, Md., resisted arrest while officers were trying to arrest him outside the Greene Turtle restaurant on York Road.

Video footage of the incident went viral on Facebook, generating hundreds of thousands of views.

Baltimore County police chief Jim Johnson issued a statement on the matter, which said his office “takes the use of force seriously and will review this incident for compliance with use of force training.”

It added the chief is “concerned about the officer’s use of a closed fist to strike the suspect several times” and said he will “look closely at the entire incident to evaluate this specific use of force.”

“Officers faced with violent, chaotic situations often must use force to protect themselves and others,” the statement reads.

Blumenstein was charged with resisting arrest, disturbing the peace, disorderly conduct, trespass and failure to obey a police officer.

The Baltimore Sun reported that Blumenstein is a student at Dickinson College in Carlisle, Pa., where he studies anthropology and plays lacrosse. He went to Georgetown Preparatory School in Bethesda, Md.

The video got more attention after State Sen. James Brochin tweeted a link to the video and had the question: “Is this actually Towson?!”

Brochin, a Democrat who represents Towson, said it appears police weren’t using the best practices in making the arrest.