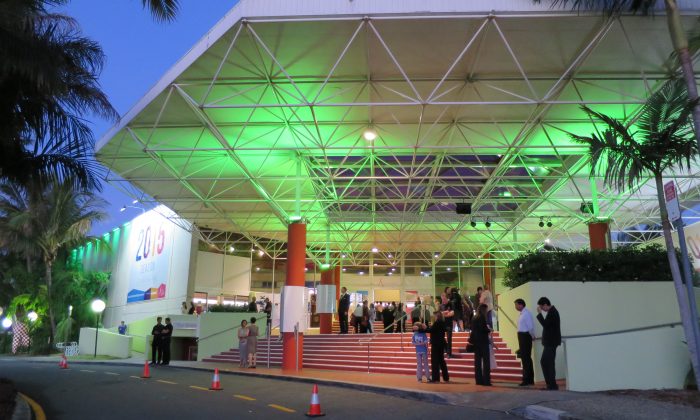 GOLD COAST, Australia—Shen Yun Performing Arts put on another sensational performance for the third and last time at The Arts Centre Gold Coast on Feb. 1. But Shen Yun is already planning to return in 2016 with an all-new program and new costumes. Theatregoers packed The Art Centre eager to see the New York-based classical Chinese dance and music performance.

Ruth Lane, a high-end ballet teacher and patron was very impressed with the Shen Yun performance, so impressed that she is going to take her six summer-school students to see Shen Yun in Brisbane.

“Having seen the show, I decided, as patron, I am going to pay for them to see the show.” she said.

Ms. Lane said her students had just learned a Chinese fan, and she felt it was important for them to see how classical dance fits into an entirely different culture.

Classical Chinese dance is an entirely different system from Western ballet traditions. She said it was “Amazing to see the differences.”

Shen Yun’s website says: “Chinese dance is at the heart of what Shen Yun does. Known for its incredible flips and spins, and its gentle elegance, it is one of the most rigorous and expressive art forms in the world.”

Ms. Lane has been involved in the classical ballet and performing arts industries for over 50 years. She was a soloist with the Sydney Festival and Perth Ballet Companies before turning to teaching. She is one of Australia’s most renowned and respected figures in classical ballet and is the senior mentor and patron a Queensland dance academy and an associate of the Royal Academy of Dance.

Shen Yun ‘A joy and delight’

Thomas Howard, a retired medical doctor, was stunned by what he saw when he watched Shen Yun at The Arts Centre.

“I think it’s stunning. It is so perfectly coordinated and such talent demonstrated individually by the entire cast,” he said. “It’s a joy and a delight and I would hope that everybody in Australia could see it, because it was quite, quite beautiful.

His friends suggested that he and his wife Dettle join them and so they did.

“This quality is something that is out of this world,” he said.

Jo Mcleish is training to be a nurse, she felt amazed and that Shen Yun had danced just for her.

“I thought it was amazing, I really couldn’t believe they captured the human spirit and put it into dance for me,” she said.

“The colours everything, it was just fantastic and the orchestra, from the time they started to the time they finished, I was just captured the whole time.”

Ms. Mcleish said the presentation was more than she had expected and she felt a little wiser after leaving the theatre.

“I actually was a bit educated from all they stories they had to tell, all the different things I found out about China that I didn’t know before,” she said. “I just would come again especially because they said it was going to be different every year, I thought yeah I’ll come again and bring the whole family.”

Shen Yun was formed in 2006 by a group of award winning Chinese artists who were determined to revive China’s ancient traditional values damaged by communist ideology in the past 65 years.

Shen Yun seeks to revive these virtues the world over with four companies travelling to more than 100 cities, performing simultaneously around 400 shows on prestigious stages in 20 countries.

Ms. Mcliesh wasn’t surprised by the spirituality imbedded into each performance because Chinese and English presenters narrated each item before the curtain opened.

“They made every complex movement look so easy, it just flowed and honestly they were fantastic. I’ve got no other words, they were amazing, I just couldn’t believe it.”

Shen Yun is currently in Australia to Feb. 28 as part of its 2015 World Tour and has upcoming shows in Brisbane, Feb 3 and 4 before heading to Sydney, Adelaide, Canberra, Melbourne and then off to Taiwan, Japan and Korea.