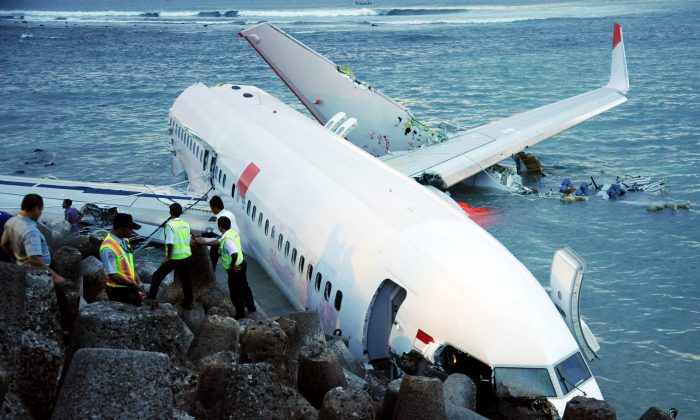 Indonesia rescuers stand by as a Lion Air Boeing 737 lies partially submerged in the water three days after it crashed while trying to land at Bali's international airport near Denpasar on April 13, 2013. (Sonny Tumbelaka/AFP/Getty Images)
Asia & Pacific

Bali crash: A preliminary report on the Lion Air flight that crashed into the sea on April 13 found poor visibility and a change in pilot control to be factors in the accident.

The report, published May 14, states that second-in-control pilot who was landing the plane handed over control to the pilot-in-command at 150 feet, and said he could not see the runway. It was raining on the day of the crash.

The Boeing 737-800 was in flight-ready condition. The Enhanced Ground Proximity Warning System
(EGPWS), a sensory feature that warns the pilots when the plane is too close to surrounding terrain, did not give any warnings.

First, Lion Air should emphasize the importance of paying attention to instrument readings during descent when visibility is poor. Second, the airline should review policies concerning “changeover of control at critical altitudes or critical time.” Third, pilots should be properly trained with regard to such changeover of control.