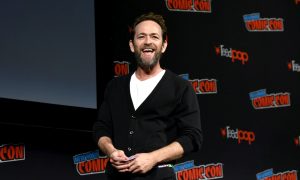 The Baby-Sitters Club is making a comeback on Netflix. (Courtesy of Scholastic)
Entertainment News

The dramatic comedy about the new adventures of five best friends who form The Baby-Sitters Club is coming to Netflix.

Based on Ann M. Martin’s original best-selling books published between the years 1986 and 2000, the new TV series will bring the story’s fictional characters back to life, including Kristy Thomas, Mary Anne Spier, Claudia Kishi, Stacey McGill, and Dawn Schafer.

Walden Media adapted the stories to make them more family-friendly for the new TV series with at least ten episodes on order. The production will be jointly led by executive producers Michael De Luca, Lucy Kitada, and Lucia Aniello.

“The entire team at Michael De Luca Productions is ecstatic to be working with Netflix and Walden Media to bring Ann M. Martin’s best-selling book series to a global audience,” De Luca and Kitada said in a public statement. “These iconic books have sold more than 180 million copies to date and now, through Netflix, they will be brought to life in a new way for audiences in over 190 countries.”

De Luca was previously the president of production at both New Line Cinema and DreamWorks, and has also been nominated for three Academy Awards for Best Picture for his work on films like The Social Network (2010), Moneyball (2011), and Captain Phillips (2013). He was also nominated for a PGA Award for his work producing Ben Stiller’s award-winning Escape at Dannemora and an Emmy for producing both the 89th and the 90th Academy Awards.

Kitada formerly worked as director of development at Global Produce Entertainment and currently works as the production executive at Michael De Luca Productions. She has worked on a number of major films, including Saving Mr Banks (2013), Earth to Echo (2014), and Cinderella (2015).

Aniello founded the comedy production company Paulilu Productions, and has directed and produced Paulilu Mixtape (2012), Broad City (2014), and Rough Night (2017). She won the Best of NY Sketch in the 2010 New York Comedy Festival and a TONY’s Critic’s Pick.

Producer Rachel Shukert, who is known for her work on TV series GLOW, will serve as show-runner, while Walden Media’s Naia Cucukov and author Martin will join the team as producers.

“For generations, young people have been captivated and inspired by the enterprising young women of The Baby-Sitters Club,” Walden Media President and CEO Frank Smith said. “Bringing this iconic series to life comes at a pivotal moment in Walden’s expansion into scripted televised content. We are honored to be part of this special collaboration with Ann M. Martin, Netflix, and Michael De Luca.”

‘The Baby-Sitters Club’ is back after Netflix ordered a ten-part series based on Ann M. Martin’s best-selling book series https://t.co/Yf7Xl03EiT

The stories tell a nostalgic journey of friendship, entrepreneurship, and personal empowerment set in Stoneybrook, Connecticut. The original series produced more than 200 books that were licensed in more than 20 territories, and more than 180 million copies have sold to date.

“I’m amazed that there are so many passionate fans of The Baby-Sitters Club after all these years, and I’m honored to continue to hear from readers—now grown, who have become writers, editors, teachers, librarians, filmmakers—who say that they see a reflection of themselves in the characters of Kristy and her friends,” Martin said in a public statement. “I’m very excited about the forthcoming series on Netflix, which I hope will inspire a new generation of readers and leaders everywhere.”

Are you ready to flash back to a time of scrunchies, denim overalls and precocious kids acting way beyond their age? Good news, @netflix is rebooting The Baby-Sitters Club! 🙌 pic.twitter.com/KOQlXr8XJ8

Many themes of the Baby-Sitters Club still resonate three decades after the original book series was released, according to Netflix.

“There has never been a more opportune time to tell an aspirational story about empowering young female entrepreneurs,” Netflix Vice President of Kids and Family Melissa Cobb said. “Together with Ann M. Martin and the team at Walden Media, our ambition is to contemporize the storylines and adventures of this iconic group of girlfriends to reflect modern-day issues.”