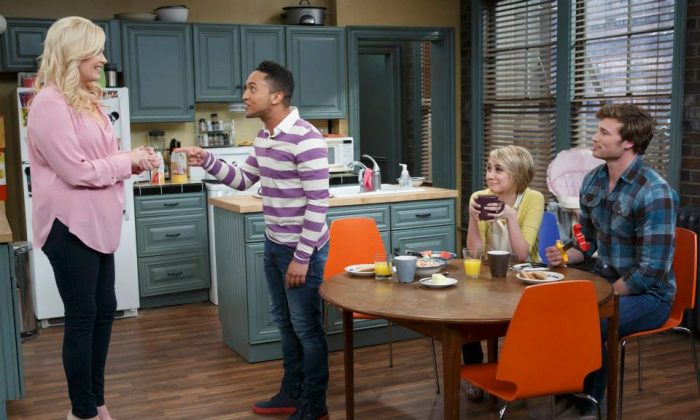 Baby Daddy has been renewed for a season 4 by ABC Family.

The sitcom follows five adults at various stages of growing up.

Melissa & Joey, which airs just before Baby Daddy, has also been renewed.

There’s no word on whether Baby Daddy will stay in its Wednesday at 8:30 p.m. timeslot. But it likely will, according to a statement by  ABC Family president Tom Ascheim.

“We’re delighted to produce more episodes of ‘Melissa & Joey’ and ‘Baby Daddy,’ two series that together have helped ABC Family establish a strong comedy block that continues to make our audience laugh out loud,” he said.

A projected premiere date is tough because the three seasons so far have all premiered at different times. Season 1 premiered on June 20, season 2 on May 29, and season 3 on January 15.

The most likely scenario is that the show will premiere around January 15, as that’s the latest date to go off of.

Meanwhile, the season 3 finale description has come out.

The episode is titled “You Can’t Go Home Again.”

“Bonnie is livid when her former New Jersey neighborhood resurrects the Block Party Olympics that she created and declares war. Seeking vengeance like only Bonnie can, she drafts everyone to crash the gathering, win all the events and put an end to the party once and for all. While visiting the Wheelers’ old tree house, Riley and Ben are surprised when they find Danny’s childhood expression of love,” the description says.

“Meanwhile, Danny learns Georgie (Mallory Jansen) is moving to Paris and realizes this could be the perfect opportunity to put some distance between himself and Riley. But given her recent discovery, what will Riley do when she learns Danny might be leaving? Is it too late for Riley and Danny to start a romantic relationship, or does her heart still belong to Ben?”