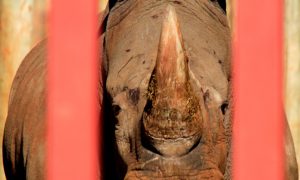 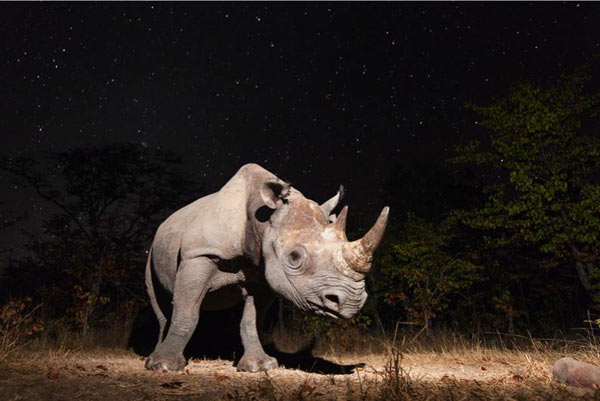 Two big—and endangered—mammals took 2014’s top prizes in the world’s biggest camera trap photo contest: a black rhino and a Asiatic cheetah. The gorgeous shot of a black rhino at night in Zambia photo won the overall photo competition, while the image of a super-rare Asiatic cheetah in Iran took the top research prize.

“After talking to researchers and photographers, we decided to overhaul the competition,” said BBC Wildlife editor Matt Swaine, which holds the BBC Wildlife Magazine’s Camera-Trap Photo of the Year competition. “We wanted to offer two separate awards: one for the most striking photograph, and another for the image that had done the most to advance our understanding of a species. The entries surpassed expectation.”

The contest had 877 entries from around the world, including incredible photos of a giant armadillo baby and a stirring shot of the elusive tropical bovine, the banteng among many other winners.

While the contest awards artistic merit, it also has several categories under research discoveries, such as new ranges for wildlife and unknown animal behavior. For example, the photos of giant armadillo baby have proven that juvenile armadillos stay with their mothers far longer than expected.

“It was believed that young giant armadillos disperse from their mothers at 6 weeks of age. This an estimate based on research from other species. It has been 17 months now since Alex was born and he continues interacting and sharing his mother’s territory. Although he forages alone, he uses burrows that she digs and only recently began digging a few burrows,” Arnaud Desbiez, an expert on giant armadillos who took the photo, wrote in a recent email update of the Giant Armadillo Project. “This new information is extremely important and demonstrates how rare, and how much care each baby giant armadillo requires. Females therefore produce very few young and each animal is extremely precious. This explains why giant armadillos have gone locally extinct in so many areas throughout their range. Too few young are born and the removal of any individual has huge consequences on the population.”

In recent years, camera traps have become a ubiquitous tool for scientists and conservationists, especially for those studying rare or elusive animals like Desbiez. These remote cameras have allowed researchers to more accurately track animal populations, locate nearly-extinct species, and even find some bizarre unheard of behavior such as the recent discovery of small carnivorous mammals, genets, riding on the backs of African buffalo and rhino.

This is the fifth year of the BBC Wildlife Magazine’s Camera-Trap Photo of the Year competition and every year sees more entires. So, camera trappers be ready to position your cameras carefully for 2015!