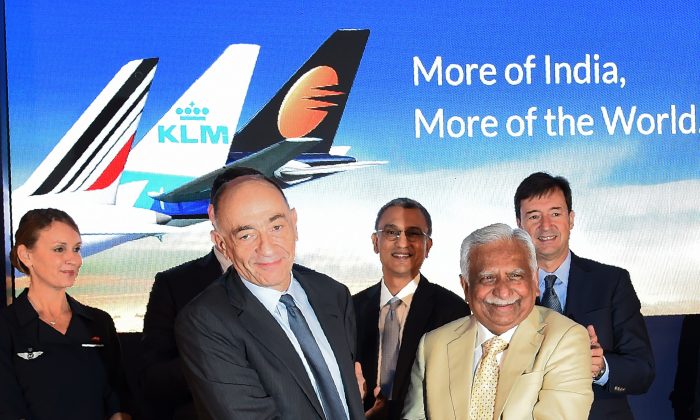 Naresh Goyal, a former ticketing agent who went on to build one of India’s biggest airlines, has stepped down as chairman of cash-strapped Jet Airways India Ltd. after caving in to pressure from creditors.

Jet’s board approved the resignation of Goyal, 69, and his wife Anita, the second-biggest full-service airline in India said in a filing March 25. Banks, which will get 114 million new shares in the company, will provide the carrier with an immediate funding of as much as 15 billion rupees ($218 million) in debt.

The resignation marks the end of an era as Goyal, once ranked as one of India’s 100 richest people, is widely seen as a pioneer in India’s fast-growing aviation industry. The move comes after his flagship company, partly owned by Abu Dhabi’s Etihad Airways PJSC, fell victim to the emergence of budget carriers offering base fares as low as 2 cents.

His departure removes a potential obstacle for creditors, who are seeking to overhaul the company and salvage a carrier that’s grounded about two-thirds of its fleet. Jet is currently 24 percent owned by Etihad, but the shareholding pattern will change after the issuance of new shares. Lenders will now own more than 50 percent of the carrier.

“The Jet Airways debt saga has entered a decisive phase,” said Rajesh Narain Gupta, managing partner of law firm SNG & Partners. “Banks have no other option but to pick up the major stake and find a new promoter for the debt-laden airline. However, it remains to be seen how successful banks become in managing an airline, going beyond their core competence.”

Lenders led by government-owned State Bank of India, have proposed an intricate bailout package, under which banks will take a majority of the company for 1 rupee—one U.S. cent—while giving the ailing airline time to arrange fresh equity. Jet’s board approved the proposal on March 25, and cleared a plan to set up an interim panel to monitor daily operations and cash flow, even as there has been no progress in getting new investors.

The banking consortium will appoint advisers to sell the stake in Jet, and everyone including Goyal and Etihad will be allowed to bid, Rajnish Kumar, SBI’s chairman, told BloombergQuint in an interview. Lenders will float an initial bidding document on April 9, and bids must be submitted by end of that month, he separately said on CNBC-TV18.

“The self-interest of the banking system is that the company must survive so that their investment remains and when it prospers they can get back their monies,” India’s Finance Minister Arun Jaitley said Mach 25. “They have kept public interest in mind because India needs more airlines, more aircraft. Creditors have kept both these considerations in mind.”

Little is known about Goyal’s childhood but he began his career in aviation as a ticketing agent for Lebanese International Airlines, according to his company’s website. In 1991, he started Jet Airways after India opened up its economy, and the airline started flying two years later. Over the years, he would expand Jet, then part-owned by Gulf Air and Kuwait Air, into the country’s second-largest airline behind flag carrier Air India.

Then budget airlines such as InterGlobe Aviation Ltd.’s IndiGo and SpiceJet Ltd. began emerging more than a decade ago, roiling the industry with discounted prices for no-frill services. Compounding Jet Airways’ woes were a depreciating Indian rupee and surging oil prices. The harsher competitive environment forced Air India to seek multiple taxpayer-funded bailouts and the likes of Kingfisher Airlines Ltd., headed by fugitive tycoon Vijay Mallya, to go out of business.

As a result, Jet Airways posted losses in nine of the past 11 years and struggled to pay its debt. Cumulative losses bloated to about $1.6 billion as of the end of March 2018.

Indian government officials have said they were trying to revive Jet Airways by changing its management but the carrier’s future will be a commercial decision taken by the lenders. The government, as well as lessors, have already asked rivals like budget carrier SpiceJet Ltd. to take over some grounded Jet Airways planes as Prime Minister Narendra Modi seeks to save jobs ahead of a general election starting next month.

It’s a “sad end” to Goyal’s tenure at the airline he founded, said Narayan Hariharan, a former senior vice president at Jet Airways. “Given his astute business and networking abilities, he was regarded a master craftsman who could stitch any alliance. Regretfully, the time and tide was very unfavorable.”