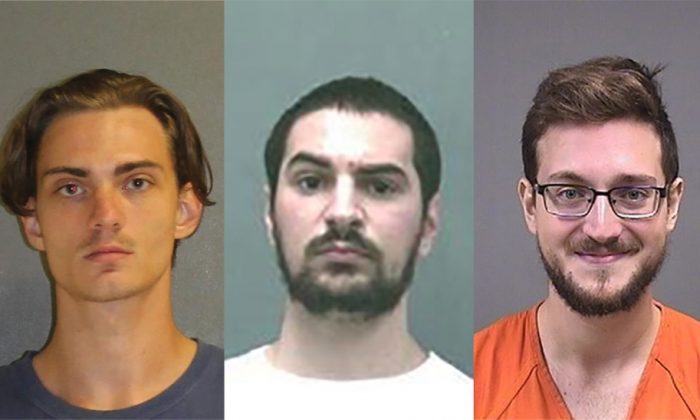 Officials in Florida, Connecticut, and Ohio announced that three men in their 20s planned to commit massacres in their respective locations.

In the first case, authorities in Florida said 25-year-old Tristan Scott Wix was arrested on Aug. 16 on suspicion of making threats to commit a mass shooting.

The Volusia County Sheriff’s Office said in a statement that detectives tracked Wix down to a Winn-Dixie parking lot in Daytona Beach Shores and arrested him after authorities were “alerted to text messages in which he detailed plans to shoot as many people as he could in a large crowd.”

The sheriff’s office said that in other messages, Wix said he wanted to kill 100 people and “break a world record for longest confirmed kill ever.”

“A school is a weak target,” Wix wrote, according to the sheriff’s office. He allegedly added that he would “be more likely to open fire on a large crowd of people from over 3 miles away.”

“I wanna open fire on a large crowd of people from over 3 miles away before I die and I need a spotter (laughing cry face emoji),” he wrote.

“She did what we beg people in the community to do—see something, say something, and let us take it from there,” Chitwood told Fox 4.

Wix was on remand at the Volusia County Branch Jail without bond.

The second arrest pertains to 22-year-old Brandon Wagshol, who according to law enforcement officials in Norwalk, Connecticut, allegedly wrote on Facebook that he was interested in committing a mass shooting.

Authorities said in a statement that Wagshol was arrested on Aug. 15 by Norwalk and FBI officials and charged with four counts of Illegal Possession of Large Capacity Magazines.

Officials said they acted on a tip that Wagshol had sought to buy the illegal items out of state, prompting a joint investigation by the Norwalk Police Department and the FBI.

Authorities said they seized firearms, body armor, and other items from Wagshol’s home. They said the firearms were registered to his father but were accessible to Wagshol.

In a statement to investigators Thursday, Wagshol said he “did not have the intention of committing any mass shootings at all whatsoever,” according to the Hartford Courant.

Wagshol did, however, admit to traveling to New Hampshire to buy the 30-round magazines and 300 rounds of ammunition with the intention of obviating what he claims is an “unconstitutional restriction” on the Second Amendment right to bear arms, the Courant reported.

“We are thankful for our partnership with the FBI and fantastic teamwork that quickly brought this investigation from a tip to an arrest,” said Chief Thomas Kulhawik. “I applaud the excellent work of our officers and the FBI agents that assisted and remind people, if they see something, say something.”

‘Made My Heart Sink’

Police in New Middletown, Ohio, were cited by WKBN-TV as saying that 20-year-old James Reardon Jr. was arrested on charges of telecommunications harassment and aggravated menacing.

Reardon was arrested at his home on Saturday morning in the Mahoning County village after making what authorities believe was a threat to a Jewish center on Instagram.

“This is a small wonderful community and this made my heart sink when I saw the video,” D’Egidio told Fox 8 Cleveland.

Police said they found at his home rounds of ammunition, semi-automatic weapons, and anti-Semitic information.

Andy Lipkin, Youngstown Area Jewish Federation’s executive vice president, said they were aware of the incident and were working with police.

“I want to stress that we know of no other threat to the Jewish Community or to any of our agencies at this point in time,” he said in a statement posted on the organization’s website. “Nonetheless, I have directed that we maintain the additional level of security for the near future.“

WKBN-TV reported that Reardon’s bond was set at $250,000 and he has been ordered to stay away from Jewish churches and organizations.

Florida Man Arrested After Threatening to Use Assault Rifle at Walmart

The three arrests follow the earlier case of an Orlando man who was arrested after he appeared to threaten to shoot people at an area Walmart.

According to a statement by the Florida Department of Law Enforcement (FDLE), 26-year-old Richard D. Clayton, of Winter Park, was being questioned about comments he allegedly posted to social media that appeared to threaten Walmart shoppers with a mass shooting.

“Three more days of probation left then I get my AR-15 [semi-automatic rifle] back,” Clayton posted to Facebook on Aug. 6, according to the FDLE. Clayton added, “Don’t go to Walmart next week.”

FDLE claims Clayton’s Facebook post was published just one day after the El Paso massacre in Texas in which a 21-year-old suspect killed 22 people and injured 26 more.

“Investigators say Clayton appears to believe in the white supremacist ideology and has a history of posting threats on Facebook using fictitious accounts,” FDLE said on Facebook.

FDLE arrests Richard Clayton for written threats after an investigation by FDLE, FBI’s JTTF, Winter Park PD.
Clayton wrote on Facebook, “3 more days of probation left then I get my AR-15 back. Don’t go to Walmart next week.” #SeeSomethingSaySomething https://t.co/Hm8BA6sgcl pic.twitter.com/7LAjVQq7aN

The El Paso shooting came just hours before another mass shooting outside of Ned Peppers in downtown Dayton, Ohio on Aug. 4. Connor Betts, 24, reportedly opened fire on crowds of people, killing nine including his own sister Megan Betts, 22, and injuring at least 27 others.

He has been charged with making written threats to kill or do bodily harm.