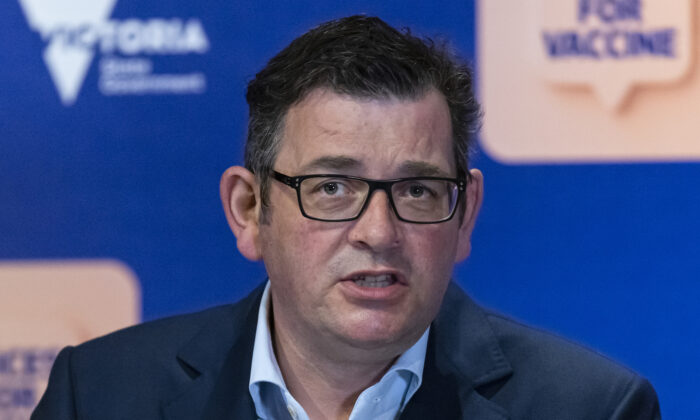 Victoria’s Premier Daniel Andrews has extended the pandemic declaration for another three months, a decision that the opposition warned would lead to a “slower road to recovery.”

Under the pandemic declaration, which was introduced late last year, the Victorian government can continue to impose pandemic rules such as mask and vaccine mandates as well as control venue capacities.

The move comes despite the overwhelming majority of Victorians over 12 years having been double vaccinated (94.6 percent) and 68.4 percent of those over 16 years have got the third dose.

While “key settings” will remain in place over winter, “modest and sensible changes” have been made to “allow Victorians to live safely with COVID-19,” Andrews said in a statement on Tuesday.

“In making the declaration, I am satisfied on reasonable grounds that there continues to be a serious risk to public health throughout Victoria due to the coronavirus disease which requires continued public health and other protective measures to reduce the risk of transmission and hospitalisation,” he added.

The declaration, which was due to expire before midnight on July 12, will now continue until at least Oct 12.

The announcement has already attracted criticism, with Australia’s former pandemic Chief Medical Officer Dr. Nick Coatsworth commenting that the justifications for the extension of emergency powers are getting shaky.

“The justification for the extension of emergency powers in any state or territory is getting shakily thin. Why isn’t our usual system of parliamentary government able to respond to the current challenges, significant though they are?,” Coatsworth said.

The justification for the extension of emergency powers in any state or territory is getting shakily thin. Why isn’t our usual system of parliamentary government able to respond to the current challenges, significant though they are? #auspol #covid19 #springst https://t.co/yIryKpg0H9

Meanwhile, opposition leader Matthew Guy on Tuesday criticised the decision, saying it shows the Premier “has no intention” of handing control over Victorians’ lives back to the people.

“The threat of mandates, lockdowns and restrictions remain, which overshadows efforts for us to recover.”

Victoria was the first state in Australia to impose pandemic-specific laws, which allow the government to create and enforce restrictions such as mask and vaccine mandates.

In December 2021, hundreds of thousands of Australians took the streets in Melbourne to protest the state government’s vaccine mandate, pandemic bills and lockdowns, which are regarded as one of the longest in the world.

The revised pandemic bill allows Andrews to declare a pandemic indefinitely, and to extend it for a period of three months at a time. Police can also enter private premises without a warrant to enforce public health directives, and issue fines of A$21,809 for individuals who breach public health rules.

In 2021, Victoria’s economy was estimated to have lost over A$799 million (US$485 million) per week since the start of the lockdown, with business and consumer confidence levels bottoming out.

Despite mounting criticism from his political opponents, Andrews has defended his government’s pandemic response as “a triumph in terms of what government in partnership with the community can do.”

“We’ve got some people who just can’t find it in themselves to say ‘well done’ and to speak out against extremism,” he said in December last year.

Meanwhile, it was announced on June 27 that Andrews will retain his position as Australia’s highest-paid state leader, pocketing A$465,000 (US$322,589) a year, after an independent tribunal granted all members of Parliament a 2.75 percent pay boost to keep up with inflation.