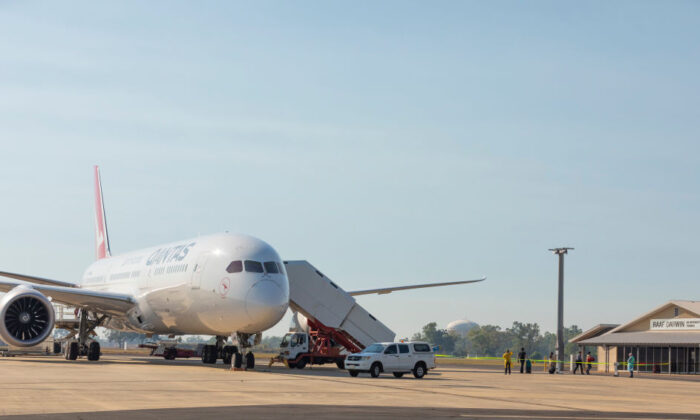 The first repatriation flight from India was marred by a large number of positive COVID-19 results. (LAC Stewart Gould/Australian Department of Defence via Getty Images)
Australia

The second repatriation flight from India has landed in Darwin on Sunday with 165 Australians, who will quarantine in the Howard Springs facility for 14 days.

The Qantas flight left New Delhi at 12:35 am (AEST) at midnight and landed in the city’s RAAF base at around 10:00 am (AEST). It is the second government-facilitated repatriation flight since the controversial ban on Indian arrivals was lifted.

No passengers were stopped from boarding after taking a COVID-19 test, which is a stark contrast to the first repatriation flight a week ago when only 80 of the 150 seats were filled due to a large number of positive COVID-19 results.

It’s still possible that the passengers may test positive after arriving or during the quarantine, but no one exhibited flu-like symptoms when landing on Sunday, the Sydney Morning Herald reported.

More than 40 passengers tested positive for the virus on May 15 before boarding the first flight, with about 30 of their family members deemed close contacts.

However, concerns were raised that false-positive tests caused some passengers to be turned away while Qantas said that all positive results were re-run under additional medical supervision, which led to the same outcomes.

“Considering all of these data points, Qantas and the Department of Foreign Affairs and Trade do not believe that any passengers booked on this flight were denied boarding in error,” the airline said.

Foreign Affairs Minister Marise Payne wrote in a post on Twitter that she was pleased to see the flight that would return Australians from India leave from Sydney on Saturday and noted it also would be carrying aid supplies for India’s COVID-19 response.

“The flight is carrying 1056 ventilators & 60 oxygen concentrators to support 🇮🇳’s COVID-19 response. We will continue to support our friends during this challenging time,” Payne said.

Pleased to see a government facilitated Qantas flight leaving Sydney today to return Australians from India. The flight is carrying 1056 ventilators & 60 oxygen concentrators to support 🇮🇳’s COVID-19 response. We will continue to support our friends during this challenging time. pic.twitter.com/8brvIAKovP

Eight more repatriation flights from India have been scheduled by June 4.

“New South Wales, Victoria, Queensland, South Australia and Western Australia have indicated they will assist by receiving passengers from India,” the DFAT said in a statement.

Darwin in Northern Territory has one more to receive of all three flights, with Victoria, NSW, and Queensland each to take one flight in the upcoming weeks.

Vulnerable Australians in India will be prioritised for the repatriation flights, according to the department. Around 1000 of the 11,200 Australians stranded in India who has registered as wanting to return to Australia are listed as vulnerable.

India is still seeing around 4000 deaths per day in the past week. The country has recorded over 26,000,000 infected cases and over 300,000 deaths in total, according to Worldometer COVID-19 Data.