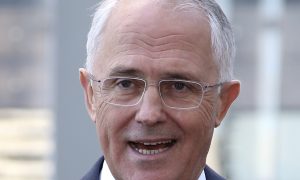 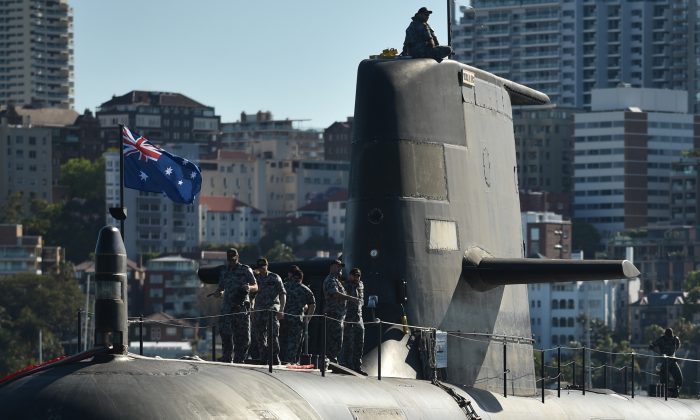 The Royal Australian Navy's HMAS Waller (SSG 75), a Collins-class diesel-electric submarine, in Sydney Harbour on Nov. 2, 2016. Australia, in April 2016, awarded French contractor DCNS the main contract to design and build its next generation of submarines to replace its current fleet of six Collins-class vessels. The new submarines will be a scaled-down, conventionally powered version of France's 4,700-tonne nuclear-fuelled Barracuda. (Peter Parks/AFP/Getty Images)
Australia

Australia is responding to China’s increasing threat in the South Pacific Ocean by finalising a deal with European manufacturers to build 12 new submarines.

The deal, which is worth $50 billion (US$36 billion), was confirmed by Australian Defence Minister Christopher Pyne at an event held at the site of the Future Submarine Construction Yard at Osborne in South Australia.

“The strategic planning agreement (SPA) will be signed in February next year (2019) and we can continue to get on with the submarine project, which has been under the design and mobilisation contract for the last two years.”

“I congratulate everyone involved in achieving this significant milestone,” Pyne said in a statement.

The new set of future submarines will be known as the Attack class and the first submarine is expected to be delivered to the Australian Navy in the early 2030s. Construction will also extend into the late 2040s to 2050s, according to the Department of Defence.

The new fleet of submarines will replace the current Collins-Class submarines that are scheduled to leave service in the 2030s. This is the largest defence procurement program in Australia’s history, according to the Department of Defence.

Very proud to announce our future submarines will be known as the #AttackClass. The name represents the inherent stealth, long-range endurance and lethality of a #submarine. The first submarine, HMAS Attack, is expected in the early 2030s. #neverwaver #AusNavy #ThinkFightWinNavy pic.twitter.com/G30BlEqO8y

“The Attack class will meet the Navy’s capability needs and help protect our security and prosperity for decades to come,” said Vice Admiral Noonan.

Initial negotiations between the Australian Department of Defence, French shipbuilder Naval Group (Formerly DCNS), and Lockheed Martin were expected to be completed between 2017 and 2018, under the Design and Mobilisation Contract that was signed on Sept. 30, 2016.

The delay in reaching an agreement were due to issues that involved the length of warranty periods to cover potential defects, and the implications on high-level co-operation and technology transfer in the event of a merger between Naval Group and Italy’s Fincantieri, according to the Australian Defence website.

Higher costs and a delay in the submarines’ delivery date were also concerns, as reported by the ABC.

After a stall in negotiations for approximately one-year, Defence Minister Pyne said on Dec. 10 that negotiations were officially concluded.

“Naval Group Australia will deliver 12 regionally-superior submarines on time and on budget,” he said.

The Most Advanced Submarine In The World

Naval Group was selected to design the submarine after its Shortfin Barracuda design won a “competitive evaluation process” in 2015 against German and Japanese designs.

The submarine will benefit from sensitive and protected technology from France that has been described as the “crown jewels” of French submarine design. This is reported to be the first time this technology has been offered to another country.

Australia’s new future submarines will be known as the Attack class. The first submarine will be called HMAS Attack and will be delivered to @Australian_Navy in the early 2030s ➡️ https://t.co/F5f77oNFV0 #auspol #ausdef pic.twitter.com/P6qLYwtUwE

The submarine will also incorporate an advanced combat control system used for analysing and tracking, ship contacts, providing situational awareness, and the ability to deploy torpedoes and missiles. The building of combat control system is contracted to Lockheed Martin Australia who use the same technology as the U.S. Navy.

“The combat system is the eyes and ears of the submarine, it enables the vessel to gather data above and below the waves, it allows them to gather intelligence, conduct surveillance and guide offensive combat operations if needed,” said Mike Oliver, program director, future submarine combat systems integration from Lockheed Martin.

According to the Defence White Paper (pdf), maintaining Australia’s technological edge and capability superiority over potential adversaries is essential to protecting Australia’s sovereignty.

The modernisation of regional forces, where countries can operate at a greater range and with more precision, will be one of many defence challenges facing Australia over the next 20 years.

“The growth in the capability of China’s military forces is the most significant example of regional military modernisation,” the White Paper reads.

“Instability in our immediate region could have strategic consequences for Australia.”

Culvahouse told the U.S. Senate on Dec. 3 that Australia may have given the Chinese regime an “outsized” influence and the opportunity to press its agenda.

“I know that from my commercial experience representing U.S. companies in Asia … and the Pacific,” Culvahouse told a Senate Foreign Relations Committee hearing on Dec. 3.

Culvahouse intends to press ahead with a “quad” initiative—a group comprising of the United States, Australia, Japan, and India—to counter the Chinese regime’s influence in the region according to the Australian Financial Review.

The building of the 12 submarines under the Futures Submarine Program is part of the Australian government’s plan to produce “a more capable, agile and potent future force.”

“The full range of other activities required to deliver this major program, including the development of the submarine construction yard, and the ongoing engagement of Australian industry to achieve Australian sovereignty, are also continuing,” Defence Minister Pyne said in a press release.