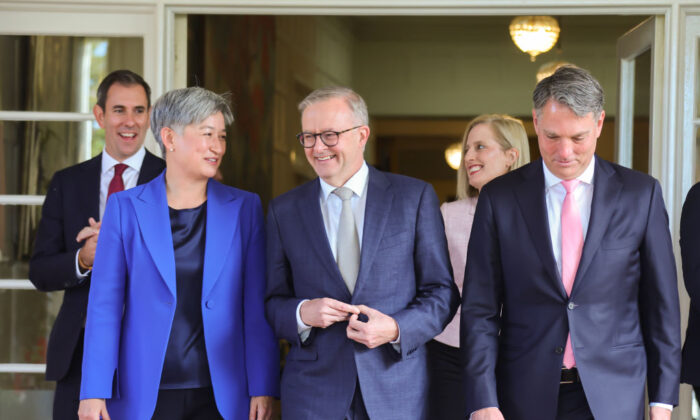 Anthony Albanese (C), Penny Wong (L) and Richard Marles (R) walk out of Government House after being sworn in as prime minister, foreign minister, and deputy prime minister respectively, in front of the Governor-General, His Excellency General the Honourable David Hurley AC DSC (Retd) in Canberra, Australia, on May 23, 2022. (David Gray/Getty Images)
Australia

When asked if he saw his government’s election as a pathway to diffuse the tensions in the Sino-Australian diplomatic relationship, Albanese referred to comments he made during the election campaign where he stated that bilateral ties would be challenging.

“What I had said and what we maintain is that the relationship with China will remain a difficult one. I said that before the election, that has not changed. It is China that has changed, not Australia, and Australia should always stand up for our values, and we will in a government that I lead,” said the new prime minister.

Albanese said his government would look at a different way of engaging with other nations.

“So the meetings that we will have, not just with the United States, but importantly with our hosts in Japan and India, are going to be very important in a good way to send a message to the world that there is a new government in Australia and that it is a government that represents a change in the terms of the way that we deal with the world on issues like climate change,” Albanese said.

He also said he would emphasise Australia’s respect for democracy and its international friendships.

The U.S. president had already spoken to the new Australian prime minister calling him on Sunday night to congratulate him. Albanese noted that the two leaders had a “fruitful and positive conversation.”