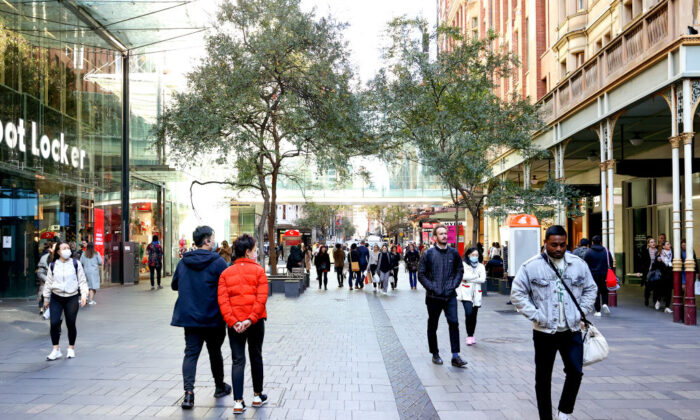 Alfred Bui
Alfred Bui is an Australian reporter based in Melbourne and focuses on local and business news. He is a former small business owner and has two master’s degrees in business and business law. Contact him at alfred.bui@epochtimes.com.au.
View profile
biggersmaller
Print

Australia saw a drop in inflation in October, which provided some relief to the economy. However, the treasurer warned that the risk of high inflation was still there.

New Australian Bureau of Statistics (ABS) data shows that the consumer price index (CPI) increased by 6.9 percent in the 12 months to October 2022, a noticeable fall compared to the record 7.3 percent in September.

The monthly inflation data, which was recently introduced by the ABS to supplement the main quarterly index, was still much higher than the Reserve Bank of Australia’s (RBA) two to three percent inflation target range.

ABS head of prices statistics Michelle Marquardt noted that the statistics agency made some changes to the way it calculated the CPI in October to reflect the shifting patterns in household spending as it did every year.

Notably, the October CPI did not include an update on the prices of some categories, such as utilities, restaurants and food services, and financial services.

Marquardt said that due to the significant differences in spending patterns between 2021 and 2022, the updated calculation method had a more significant impact on the CPI than usual and thus was partially responsible for the unexpected monthly decrease.

She added that the annual inflation rate would have been 7.1 percent under the old weighting system instead of the current 6.9 percent.

In October, the three main contributors to inflation were new dwellings, automotive fuel and fruit and vegetables.

The downward movement in the growth of prices across several key categories helped lower the CPI.

Specifically, fruit and vegetable prices rose by 9.4 percent annually in October, a sharp decline compared to 17.4 percent in September.

Furthermore, the annual growth of holiday travel and accommodation prices also fell from 12.6 percent in September to 3.7 percent in October as the end of school holidays and peak European and American travel seasons caused airfares to drop.

However, the reinstatement of the full fuel excise raised automotive fuel prices by 11.8 percent in the year to October, up from 10.1 percent in the previous month.

Rent prices also went up by 0.6 percent to 3.5 percent in October due to low vacancy rates.

Economists’ Response to the Drop in Inflation

Sarah Hunter, a senior economist at KPMG, told Sky News that Australia was at the peak of inflation right now, and the CPI was likely to be coming back down.

She also said that the ABS’s monthly data was new and would be subject to some volatility for a short period.

Jameson Coombs, an economist from St George bank, said the monthly index was more volatile than the quarterly version and that the drop recorded in October did not necessarily translate into a downward trend.

“The data, although softer, suggests that the inflation pulse remains strong and that domestic drivers of inflation remain acute,” he said in comments obtained by AAP.

While Treasurer Jim Chalmers welcomed the decline in inflation, he warned that the impact of the recent floods and soaring energy costs had not fed into prices.

“While the slight easing in the indicator in October is welcome, we know there are further price pressures that will drive inflation this quarter,” he said, reported the Australian.

Regarding the effect of the new inflation on the RBA’s upcoming interest rate decision, Hunter said it would reinforce the central bank’s view that they could maintain the current pace of rate rise of 0.25 percent.

Alfred Bui
Alfred Bui is an Australian reporter based in Melbourne and focuses on local and business news. He is a former small business owner and has two master’s degrees in business and business law. Contact him at alfred.bui@epochtimes.com.au.