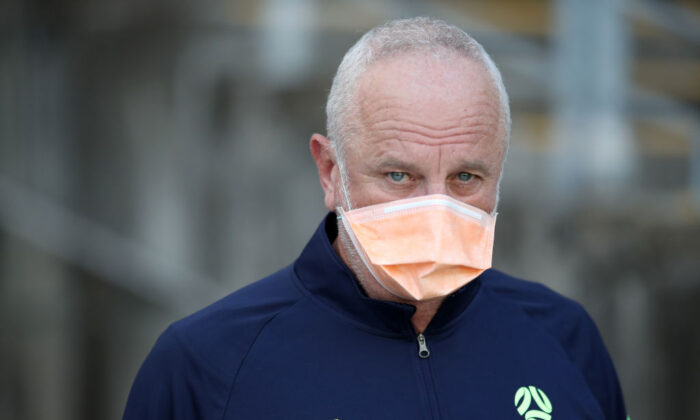 Socceroos Coach Graham Arnold has tested positive to COVID-19 ahead of Australia’s World Cup qualifier against Vietnam on Jan.27.

Football Australia confirmed in a media release on Sunday that Arnold, who is fully vaccinated and received a booster shot ten days ago, is currently isolating in Melbourne after returning the positive COVID-19 result.

Football Australia Chief Executive Officer James Johnson said that despite the setback, Arnold is feeling positive and is staying digitally connected with all the team activities, including training sessions.

“Graham and the Socceroos staff have sacrificed a lot over the past year to guide the team on a qualification campaign in the middle of a pandemic, so, unfortunately, on the eve of this important home qualifying match, Graham has returned his first positive COVID result,” he said.

“However, we are pleased that our thorough protocols picked up this result early so that the risk of infection to players and staff leading into match week was controlled.”

Meanwhile, Arnold said that he has complete faith in the players and staff to implement the plan in his absence ahead of the upcoming match.

“My staff and I have always planned that there could be a day that I might not be able to come to a match, so I believe with great planning and people in place, everything will run smoothly this week,” he said.

“I am feeling great and have no symptoms, and while I am disappointed that I won’t be with the players and staff physically this week, I believe that the standards, processes, and culture that we have instilled over the past three years of this journey will remain high and in place.”

With Arnold temporarily out of action, former Manchester United Assistant Coach Rene Meulensteen, together with Socceroos great Tony Vidmar, will take on coaching duties until Arnold is cleared to return.

This comes as Australia prepares to take on Vietnam in a World Cup qualifying match at Melbourne Rectangular Stadium on Thursday.

Three wins for Australia saw a solid start to this phase of qualifying matches, but a loss to Japan and draws with Saudi Arabia and China have left the Socceroos outside the automatic qualification spots in their group.

This means they’ll have to bounce back quickly if they want to seal a berth at the World Cup in Qatar without having to navigate through the playoffs, so beating Vietnam on Thursday is crucial.

“We have four games that we have to play between now and qualifying for Qatar, and I expect to win four games,” Arnold said on Sunday.

Arnold named a 25-player squad on Friday for the match against Vietnam and the following one against Oman on Feb.1.

He made nine changes, including the return of influential players Aaron Mooy and Tom Rogic.