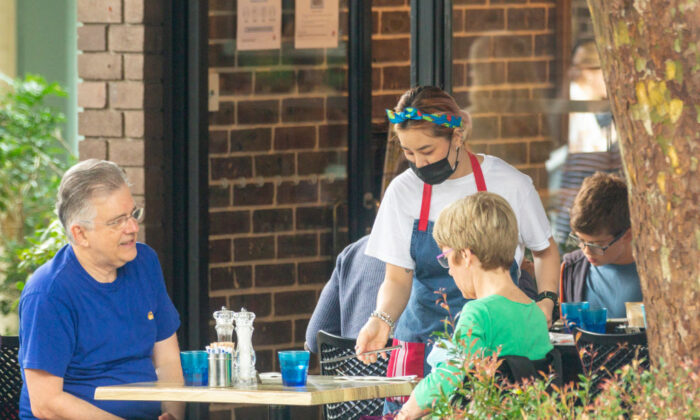 A waitress is seen delivering cutlery at a cafe in Sydney, Australia, on Jan. 3, 2021. (Jenny Evans/Getty Images)
Australia

Australian wages rose by 2.6 percent on average in the 12 months to June. However, the increase was unlikely enough for Australians to cover living cost hikes.

As the annual inflation rate is sitting at 6.1 percent, the wage figures for June indicates that real wages are actually decreasing, which adds more pressure on household budgets.

According to the Australian Bureau of Statistics (ABS), while wages only went up by 0.7 percent compared to the previous quarter, the 2.6 percent rise was the highest annual growth rate recorded since September 2014.

Michelle Marquardt, the head of prices statistics at the ABS, said wages growth in the June quarter was driven by the private sector.

“Expanding demand for skilled jobs over the last 12 months has continued to build wage pressure across a broader range of industries and jobs, reflected in the increasing size of pay rises,” she said.

Among the industries, the construction sector saw the most significant wage rise in the June quarter at 1.4 percent, followed by mining at 0.9 percent and manufacturing at 0.8 percent.

In contrast, accommodation and food services ended up at the bottom of the list with only 0.1 percent growth.

The modest wage increases in the three months to June are not surprising as economists expected growth to accelerate in the second half of 2022, which is also in line with the Reserve Bank of Australia’s (RBA) forecasts.

In the minutes of its Aug. 3 board meeting, the RBA said that over 60 percent of private enterprises planned to boost wages for their employees by at least three percent over the next 12 months.

Meanwhile, data from the human resources platform Employment Hero showed that employees at larger Australian businesses saw their wages growing faster, with firms having more than 200 workers raising wages by 6.7 percent in the past year.

On the other hand, smaller businesses had been slower to lift employee pay, with wages increasing by four percent at companies employing between one and 19 workers.

In addition, the pace of wages growth varied among the states and territories as employees in the Australian Capital Territory, Western Australia, Queensland, and New South Wales reported higher pay rises than in other jurisdictions.

“It is positive to see the average employee size increase and growth of the median wage since last year given that the JobKeeper program has ended and the intense economic pressures at play,” Employment Hero chief executive officer Ben Thompson said.