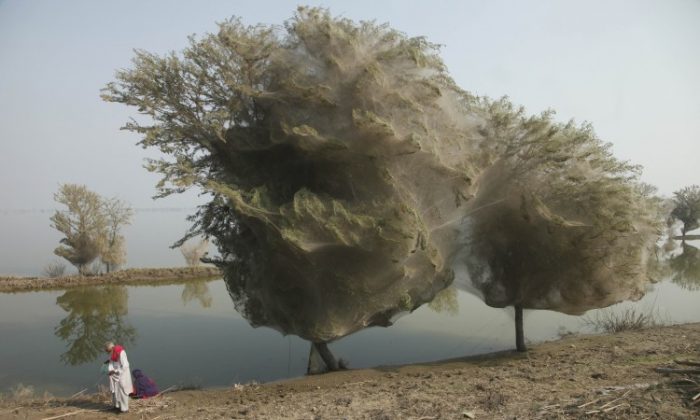 The New South Wales town of Wagga Wagga, which last week survived severe flooding that led 9,000 people to evacuate, is now facing another natural phenomenon—millions of tiny spiders have invaded the region, blanketing some areas with hundreds of metres of webs.

Known as “ballooning”, the massive webs are formed when the small hairy-legged creatures are forced to climb up shrubs and trees, looking to escape the rising waters.

“They often do it as a way of dispersing and getting into a new area but, in an event like this, they are just trying to escape the floods,” Graham Milledge, entomology collections manager at the Australian Museum in Sydney, told AAP.

“They often land in the same place and that is why you get this large mass of them.”

Wagga Wagga was one of dozens of towns affected by floods in New South Wales in the last week. The Natural Disaster Council declared a state emergency on Tuesday, as rivers spilled over the plains after heavy rainfall persisted in 75 per cent of the state.

Typically harmless to humans, the spiders from the Linyphiidae family, grow only up to one centimetre in length. They are commonly referred to as sheet weavers because of the shape of their webs, or money spiders due to a superstition that the creatures bring good fortune if they land on you.

A similar phenomenon was seen in Pakistan in 2010, after floods ravaged the country.

Unprecedented monsoons dropped nearly ten years’ worth of rainfall on Pakistan in one week, swelling the country’s rivers. Spiders and other arthropods were reported to have climbed up trees, creating cocoons of webs.