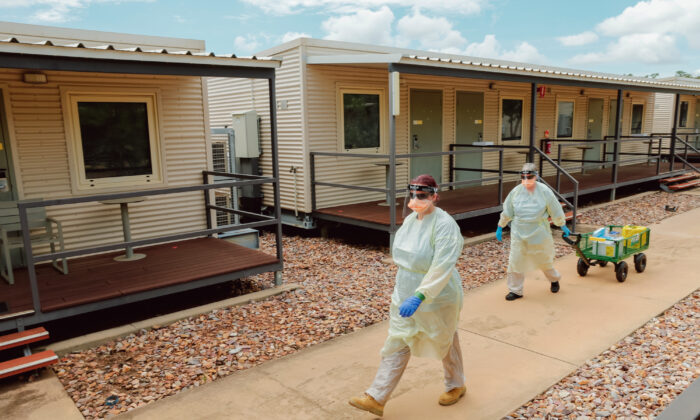 One of Australia’s most controversial COVID-19 quarantine camps, Howard Springs Centre for National Resilience, will be closed by authorities, along with other vaccination and testing centres.

The Northern Territory government revealed that it would not be renewing the public health emergency order set to end on June 16, bringing an end to the territories vaccine mandates and the closure of the Howard Springs quarantine centre.

“We’re moving into a world where we are living with COVID. We will end the public health emergency; the vaccine mandate will also end,” Chief Minister Natasha Fyles confirmed on Thursday.

“From June 16, we will transition from a state of public health emergency to living with COVID as it becomes endemic in our community.”

The Howard Springs quarantine camp, also known as the Centre for National Resilience, is Australia’s largest quarantine facility and attracted international controversy when an Australian woman has described her time in the then mandatory supervised quarantine facilities, often reported as “quarantine camps,” as like being “in prison,” in an interview with British news site UnHerd.

While the centre will cease operations, it will be maintained to be fully functional at any time if required for use within the next 12 months.

Fyles said efforts to transition Howard Springs towards closure would be completed together with the federal government as it was an “important asset” for the nation.

“So we have already transitioned, and the numbers [in Howard Springs] have decreased significantly. In fact, there’s been only a handful of people in the facility through the month of May, and presently I don’t think there was anyone there,” she said.

The chief minister said the facility was “something Territorians should be proud of” as it processed thousands of overseas Australians, assisting their return home.

She also revealed that from June 16, the mandatory vaccination policy would end but noted that businesses in the territory would be able to require their employees to be fully vaccinated at their own discretion.

While COVID-19 policies will begin to scale back, the chief health officer will retain the power to issue health orders for up to two years, including mask and vaccine mandates.

But Chief Health Officer Charles Pain said the likelihood of facing a situation that required the powers in the future appeared to be decreasing.

The changing stance towards COVID-19 vaccinations in the health industry also means that the virus will likely be treated similarly to the flu and measles going forward.

Additionally, companies will be able to rehire workers they were forced to lay off after the mandates were enforced.

“It would be up to individual agencies to work through what their workforce requirements are going forward and whom they wish to employ,” Fyles said.

The Northern Territory’s vaccination rate is comparatively lower than many other Australian jurisdictions, at 73 percent for people aged 16 and above.

When asked if the government had any regrets about its handling of the COVID-19 pandemic, Fyles said: “Absolutely not.”

“The way in which we have received that health advice it’s been handled and the way the territory community has responded is something to be proud of,” she said.