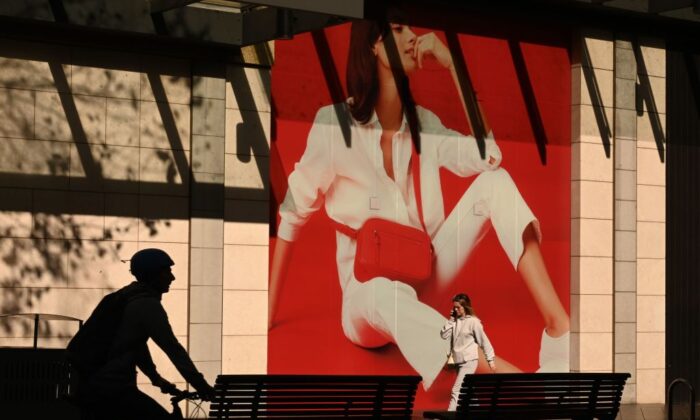 People walk past an advertising billboard along a street in Sydney, Australia on July 21, 2020. (Peter Parks/AFP via Getty Images)
Australia

Australian Prime Minister Scott Morrison has said he anticipates that the unemployment rate will dip below four percent this year.

The jobless rate dropped to 4.2 percent last December, the lowest on record for 13 years.

“I believe we can now achieve an unemployment rate with a ‘three’ in front of it this year,” the prime minister told the National Press Club in Canberra on Feb. 1. “Our goal is to achieve this in the second half of 2022. We have not seen this in Australia for almost half a century.”

Philip Lowe, the Reserve Bank of Australia (RBA) governor, shares the same view as Morrison saying he expects the unemployment rate to hover around 3.75 percent by the end of 2023.

Nevertheless, Lowe said he remains calm over the prospect of raising the cash rate despite increasing inflation pressures and the declining unemployment rate.

The central bank confirmed at its first board meeting of 2022 that the cash rate would stay at a record low of 0.1 percent, as economists and financial markets had expected.

“The board is committed to maintaining highly supportive monetary conditions to achieve its objectives of a return to full employment in Australia and inflation consistent with the target,” Lowe said in a statement on Feb. 1.

Financial markets, which have been reflecting the risk of a rate increase by mid-year into the prices of their products, had expected the RBA governor to present a more specific outlook for the cash rate.

“The lack of clarity on forward guidance in this statement leaves plenty of opportunity for Governor Lowe to fill in the gaps,” Deutsche Bank chief economist for Australia Phil O’Donoghue said.

However, he noted that there was nothing in Lowe’s statement that could deter him from anticipating a rise in the cash rate in August. The RBA will have received two more quarterly inflation reports by that time.

Meanwhile, retail spending saw a sharp fall of 4.4 percent last December after it experienced several months of remarkably robust results as the economy recovered from COVID-19 lockdowns in late 2021.

According to the Australian Bureau of Statistics, last December’s monthly turnover reached $31.9 billion (US$22.7 billion), the second-highest level in the wake of a record $33.4 billion (US$23.8 billion) in November.

Nevertheless, Australian Retailers Association CEO Paul Zahra said that the prospect of retail trade in January and February was not bright because of the Omicron variant.

However, consumer confidence, an economic indicator measuring the tendency of future household spending, improved further in the week commencing Jan. 24 as the effect of declining Omicron cases seemed to outdo pressures from rising inflation, and the risk of an official increase in the interest rate this year.

The ANZ-Roy Morgan consumer confidence index increased 1.7 percent to 101.8 in the week commencing Jan. 24, recovering from a nose dive to 97.9 in mid-January when the country was at the peak of the Omicron wave.

On the other hand, manufacturing has suffered further impacts from disruptions in the supply chain and labour shortage over the summer months, which interrupted the improvement in the industry after COVID-19 lockdowns ended last year.

Innes Willox, the chief executive of the Australian Industry Group (Ai Group), said the sector was feeling cost pressures as input prices were on the rise while selling prices only covered these expenses to some extent.

The manufacturing sector underwent a modest contraction as the Ai Group performance of manufacturing index dipped 6.4 points over December and January to 48.4.