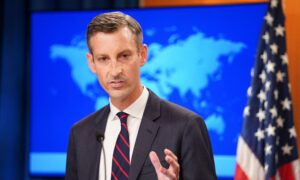 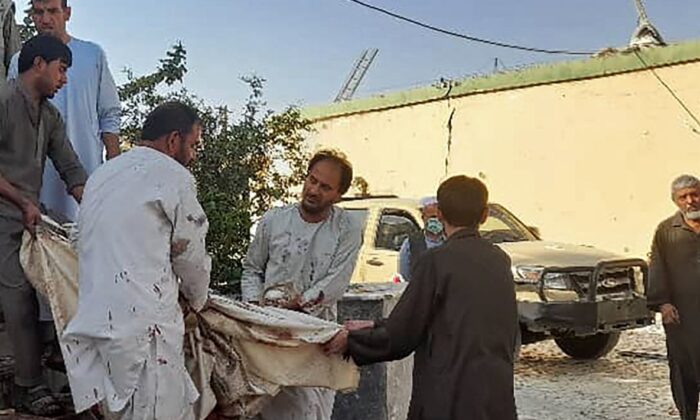 Afghan men carry the dead body of a victim to an ambulance after a bomb attack at a mosque in Kunduz on October 8, 2021. (AFP via Getty Images)
Australia

Morrison made the comments when he attended the virtual Group of 20 (G20) summit overnight, hosted by the Italian prime minister. He also called on global leaders to maintain pressure on the Taliban to live up to the commitments that they had made following their takeover of Afghanistan in August.

The G20 leaders had agreed to work together to avoid a humanitarian disaster in the country, after the chaotic withdrawal of U.S. troops in August, with the European Union pledging more than one billion euros ($A1.57 billion) in aid packages.

However, since the Taliban seized power, ISIS or the Islamic State terrorists have launched more than 30 attacks in Afghanistan,  The National reported.

ISIS, an enemy of the Taliban, has claimed responsibility for several recent attacks, including the Oct. 8 suicide bombing that killed 46 minority Shiite Muslims. Washington considers ISIS its greatest terrorist threat emanating from Afghanistan.

A readout of the G20 meeting said leaders were deeply concerned about the crisis unfolding in the country and emphasized continued humanitarian support.

“They demand the Taliban allow unimpeded access for aid workers, uphold human rights especially for women and girls, and that it allow those who want to leave to be able to do so,” the readout said.

It was revealed earlier this week at an Australian senate inquiry that 100,000 Afghan nationals have sought humanitarian visas from Australia, with 26,000 applications in just the last seven weeks.

Australia evacuated 4,100 people from Afghanistan since the Taliban takeover in August.

The G20 meeting also called on the Taliban to not allow Afghanistan to become a haven for terrorists.

“Several (leaders) called for a unified stance, especially on messages to the Taliban, and a number noted that to get things done, they had to deal with the Taliban but that this did not constitute recognition,” the readout said.

Morrison said ahead of the meeting that a coordinated approach from leaders was needed for Afghanistan.

“I stand with G20 members in supporting international agencies delivering much needed humanitarian assistance on the ground,” he said. “Australia is committed to helping Afghanistan build a stable and secure future.”

This comes after the United States pledged to provide aid directly to the Afghan people while refusing to give political recognition to the Taliban, according to NPR.

On Oct. 10, the U.S. Department of State spokesman Ned Price released a statement after U.S. officials met with “senior Taliban representatives” in Doha, Qatar, on Oct. 9 and 10 for their first direct talks since the U.S. troops withdrew at the end of August.

The talks also focussed on security and terrorism concerns and safe passage for U.S. citizens, other foreign nationals, and the United States’ Afghan partners.

The United States also highlighted human rights concerns in Afghanistan, including “the meaningful participation of women and girls in all aspects of Afghan society,” Price said.

“The discussions were candid and professional with the U.S. delegation reiterating that the Taliban will be judged on its actions, not only its words.”

Taliban political spokesman Suhail Shaheen said that the movement’s interim foreign minister assured the United States during the talks that the Taliban is committed to seeing that extremists do not use Afghanistan to launch attacks against other countries.

NPR reported that the Taliban said the talks in Doha, Qatar, had “gone well,” with the United States not tying any aid to official recognition of the Taliban’s rule.

AAOP contributed to this report.