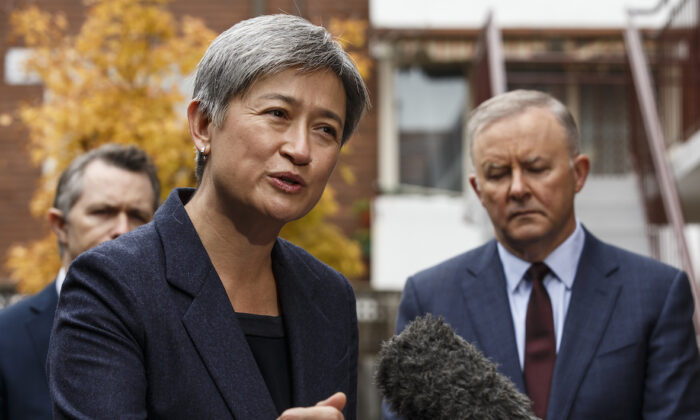 Australia's Shadow Foreign Affairs Minister Senator Penny Wong speaks to the media along side leader of the opposition, Anthony Albanese, in Melbourne, Australia, on May 18, 2021. (AAP Image/Daniel Pockett)
Australia

The incumbent Australian Coalition government has panned the opposition Labor Party’s newly released Pacific engagement policy, saying it added “nothing new” to existing initiatives to engage with nations in the region.

The Labor Party, on April 26, released its alternative “whole of government effort” Pacific strategy amid ongoing concerns about a security deal between the Solomon Islands and Beijing—a development which has spurred the opposition to attack the federal government’s handling of relations with the region.

Under its new plan, the Labor Party will “substantially increase regional aid” to $525 million (US$379.4 million) over a four year period to Timor-Leste and the Pacific, as well as double funding for aerial surveillance under the Pacific Maritime Security Program to $12 million (US$8.6 million) a year to help nations recoup losses from fishing from China’s sizeable illegal fishing fleet.

The Labor Party would also look to establish a $6.55 million Australia Pacific Defence School to train security personnel in the region.

Further, the Australian Broadcasting Corporation (ABC) would receive an additional $8 million a year—over four years—for broadcasting into the region, including shortwave radio broadcasting and commercial TV content. There would also be training for Pacific journalists.

The Labor plan also includes initiatives to boost funding for climate-proof infrastructure in the region, as well as regular study trips to counter Chinese interference efforts.

“Labor’s plan will restore Australia’s place as first partner of choice for our Pacific family,” Penny Wong, the shadow foreign affairs spokesperson, said in a statement. “The vacuum (Prime Minister) Scott Morrison has created is being filled by others—who do not share our interests and values.”

Wong said the plan was developed in consultation with Pacific partners.

Prime Minister Scott Morrison dismissed it saying it was no different from the existing Pacific Step-Up and that Labor had little understanding of the region’s complexities.

Finance Minister Simon Birmingham told ABC the government had done many of the things in Labor’s plan.

“We have a ‘whole of government approach,’ it’s called the Office of the Pacific. It brings together officials from all the key departments, whether that’s the Department of Foreign Affairs and Trade, Defence and Home Affairs, and a number of others,” he said on April 26.

“We have a strong Pacific labour mobility program, a real focus on climate adaptation and resilience in a structured program. So, these [things] are all underway.”

On April 24, Prime Minister Morrison said Solomon Islands Prime Minister Manasseh Sogavare had committed to ensuring there would be no Beijing military presence in the region.

U.S. and Australian leaders have scrambled in recent weeks to ensure the Chinese Communist Party (CCP) does not extend a foot into the South Pacific region after details of a secret security deal came to light.

According to a leaked draft of the agreement, Beijing would be able to dispatch police, troops, weapons, and even naval ships—with the consent of the Solomon Islands—to “protect the safety of Chinese personnel and major projects in the Solomon Islands.”

A move, experts warn, could lead to the militarization of the region akin to the South China Sea.