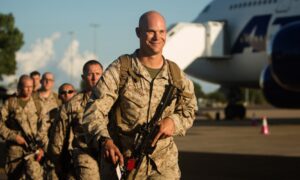 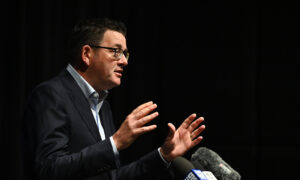 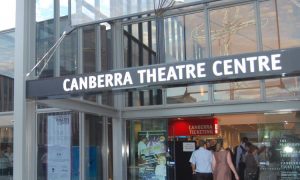 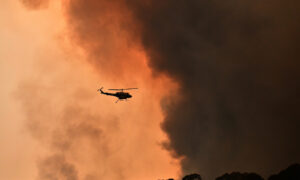 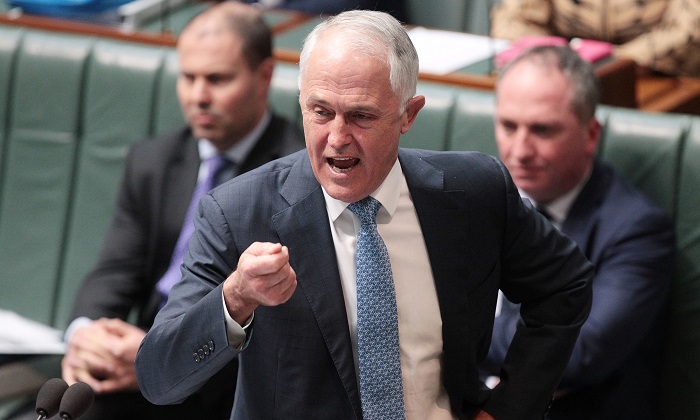 Australian Prime Minister Malcom Turnbull has declared he will “stand up” for Australia in response to criticism from Beijing. (Stefan Postles/Getty Images)
Australia

Australian Prime Minister Malcolm Turnbull has said he will not back away from standing up for his country’s interests following criticism from Beijing over earlier comments made about reports of Chinese interference in Australia’s affairs.

Speaking to journalists on Saturday, Turnbull rejected criticism from China’s Foreign Ministry spokesperson Geng Shuang who said Friday that the Australian leader was pandering to “irresponsible reports by some Australian media.”

A day earlier Turnbull said he had taken seriously media reports of Chinese meddling in Australian politics and the broader community.

“We are strongly dissatisfied with those remarks and [have] lodged stern representations with the Australian side,” said Geng.

. @TurnbullMalcolm : Turnbull has denied he feels intimidated or bullied by China's complaint. 'Chinese people stand up for their sovereignty and they expect Australian people and particularly Australian leaders to stand up for theirs'. MORE: https://t.co/sRwmUNcEVW pic.twitter.com/TtucgLLwM2

In response to Geng’s comments, Turnbull said he would “stand up” for Australians.

“And we stand up and so we say, the Australian people stand up,” he said.

While historical accuracy of the so-called words from 1949 have been negated or doubted by China experts, Turnbull’s comments are being seen as a strong reproach to Beijing’s criticism amidst widespread concern over Chinese Communist Party interference in Australian affairs.

Peter Hartcher: This hasn't been about race at all, this has been about the Chinese communist party and it's attempts to spread it's influences. MORE: https://t.co/fOhyrTz0N2 pic.twitter.com/PwIfDe00FZ

Defense analyst Malcolm Davis from the Australian Strategic Policy Institute told the ABC that Beijing was attempting to bully Australia by complaining about any references to its meddling in domestic politics.

“They are trying to intimidate us and what we have to understand is the reports of Chinese infiltration and attempts to maneuver and manipulate Australian politics and Australian political debate are legitimate,” said Davis.

“The Chinese are seeking to interfere in our political process.”

He said that Beijing is seeking a strategic advantage over the U.S.

“Ultimately, their goal is to have Australia become more pro-China, less pro-U.S., align with Beijing and distance itself from the United States and ultimately end the alliance,” Davis said.

“Everyone understands what China is about, the difference is now we are starting to fight back against them.”

Joe Hockey, the current Ambassador of Australia to the U.S, told a forum in Canberra last week that “this is a serious issue as it represents a threat to what many Australians fought and died for and that’s a free and transparent, open democracy,” reported the ABC.

Hockey said that he had been repeatedly approached by American officials concerned by reports that Beijing is trying to sway current and former Australian politicians through donations, according to the ABC report.

“It’s about meddling with another country’s election and yes, it is treated very seriously,” he said.

“The Americans raise it with me all the time because it’s also directly related to any potential shift by their closest ally towards China.”

Hockey said that the situation in Australia is being watched “very closely” by the U.S. administration.

ASIO first briefed the administrative heads of both major parties about the worrying links between political donors and the Chinese Communist Party back in 2015.

At the center of much of the recent reporting on China’s interference in Australian issues has been centered on Australian Labor Party (ALP) senator Sam Dastyari. Over the past several weeks there have been widespread media coverage on Dastyari’s support of certain Beijing polices and his links with a Beijing-linked Chinese billionaire.

Among the more recent articles, Dastyari allegedly pressured his own party’s foreign affairs spokeswoman, Tanya Plibersek, not to see a democracy activist in Hong Kong, reported Fairfax Media on Monday.

Dastyari reportedly pressured Plibersek on multiple occasions during 2015 not to meet Professor Joseph Cheng Yu-shek – a Chinese democracy activist – because it would upset people in the “Chinese community.” Despite the pressure, Plibersek did meet Cheng during her Hong Kong visit.

Labor Senator Sam Dastyari is under renewed pressure, with new allegations about his links to the Chinese Government. #AusPol @KerrieYaxley #9News pic.twitter.com/GtVeO8Zo9E

Over the past several weeks, the federal government has called on Dastyari to resign. Initially such calls were made after media reports surfaced on how Dastyari allegedly warned Chinese Communist Party-linked Huang Xiangmo that his phone was likely being tapped by intelligence services, including those of the U.S. government.

The senator also received negative press over a 2016 speech when he publicly backed Beijing’s aggressive moves in the South China Sea. His comments, made while standing next to Huang, were contradictory to that of his party’s and the Australian government’s policy on the issue.

The relationship between Dastyari and Huang were exposed earlier in the year as part of an in-depth investigation carried out by Fairfax and the ABC that revealed the extent of Chinese Communist Party interference in Australia’s political system and within the Chinese-Australian community.

“It calls into question, again, Senator Dasyari’s judgement and his allegiances,” @QuentinMcDermot on Labor Senator Sam Dastyari who is again under pressure over his links to Beijing. #auspol pic.twitter.com/lPoVrN2Xz7

Among other the more recent reports on the issue include how the Australian Security Intelligence Organization (ASIO) believes that 10 recent political candidates for local and state governments have links to Chinese intelligence agencies.

ASIO said one of those candidates was elected to office and is currently still there, reported The Weekend Australian on Saturday, Dec. 9. The article said that ASIO had identified them but the report did not name who they were.