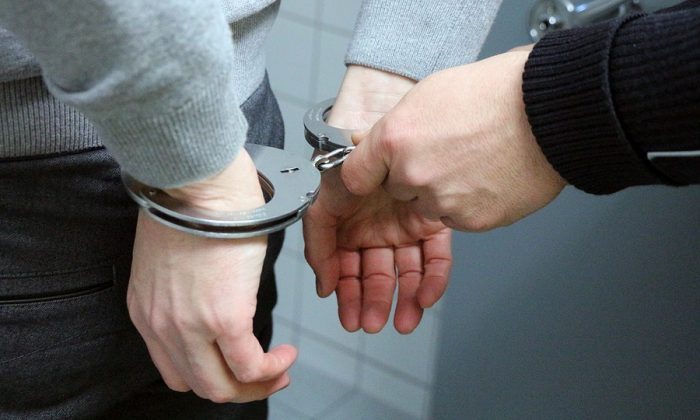 Representational photo of handcuffs being applied to a suspect. (Pixabay)
By Tom Ozimek

A convicted pedophile with dwarfism could avoid time behind bars due to fears he’ll be targeted by other inmates because of his diminutive stature.

When the 21-year-old faced a court in Townsville, he admitted to using a fake Facebook account to coax underage girls into sending him nude photographs of themselves, the Courier Mail reported.

#AusPol he should be given the same consideration he gave those children absolutely zero https://t.co/sa0rigdyrr

Judge Greg Lynham said at the time that the sheer number of victims and the details of the crimes committed suggested an appropriate sentence would be jail.

Knuth’s lawyer, Bruce Gillan, argued at an initial sentencing in December, according to the Daily Mail, that jail would be a “very difficult” environment for him because of his small size.

Lynham in December postponed sentencing in order to gain a better understanding of the vulnerabilities of someone with dwarfism in jail.

On March 20, Knuth’s case was heard in court, where Lynham ordered the Director of Public Prosecutions explicitly to explore the suitability of the Townsville Correctional Center for someone with Knuth’s condition.

“They can accommodate (some) sorts of conditions quite well,” Lynham told the court, according to the Daily Mail, “but we have unique features here that I’m not sure whether the Townsville Correctional Centre has been confronted with before.”

“In fairness to them, they need to have an opportunity to consider how they might accommodate,” Lynham said.

Meanwhile, Knuth remains out on bail.

The Case Against Knuth

Crown prosecutor Dominique Orr was cited by the Courier Mail as alleging that Knuth used a fake Facebook profile to engage in sexually explicit conversations with 27 child victims between October 2016 and September 2017.

Orr called Knuth a “sexual predator” who preyed on vulnerable children as young as 12 years old.

She alleged Knuth posed as a personal trainer named Jack Thomason on the fake Facebook profile, and would bait the young girls with photographs of naked male models, pretending they showcased his own physique.

“(On one occasion he sent) ‘show me your [expletive]’ so I know you are serious,” Orr said in court testimony, describing the sexually explicit messages Knuth was accused of sending to minors.

The prosecutors alleged Knuth even threatened one of the girls with a beating and rape.

Knuth’s father gave a statement to reporters outside the courthouse: “We love our son, obviously we don’t condone what he’s done … we’ll move on from here but obviously I can’t say anymore because it’s before the court.”

Knuth’s case recalls the story of Bryan Anthony Bowen, a Welsh man with dwarfism who was found guilty of inciting young girls to perform sex acts but was spared jail due to his size.

The judge said he would have a “very hard time” in prison.

Bowen contacted two girls, aged 13 and 15, on Facebook and asked them to send nude photographs and have sex with him, according to The Metro.

Judge Rhys Rowland was cited by the New York Post as saying during Bowen’s sentencing that he found the 26-year-old “small in stature and emotionally inadequate” to do hard time behind bars.

Rowland handed Bowen, who had no prior convictions, a 48-week prison sentence suspended for two years.

He also ordered the convicted pedophile to register as a sex offender for 10 years.