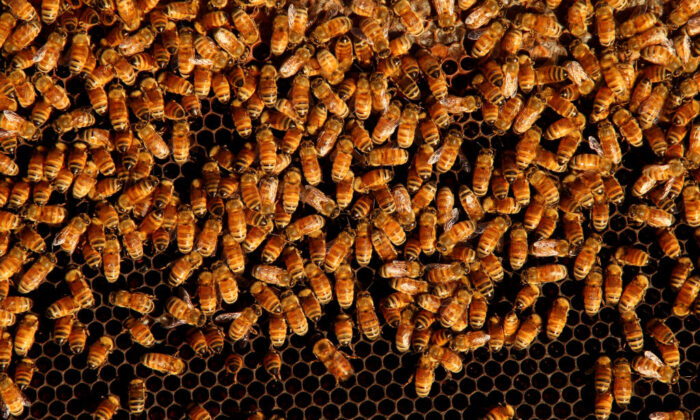 Bees are seen on a honeycomb cell in Woolloomooloo, Australia, on May 14, 2021. (Lisa Maree Williams/Getty Images)
Australia

A shortage of bee hives due to varroa mite restrictions is threatening to cause millions of dollars of losses to almond farmers in Australia.

According to Almond Board of Australia chief executive Tim Jackson, farmers could be hit with significant losses as a ban on New South Wales (NSW) hives being moved into Victoria coincided with the start of the almond pollination season.

Jackson said the ban could result in a drop in almond production of 30,000 tonnes as Victoria grew 60 percent of Australia’s almonds, which would take a massive toll on the industry.

“There’s a lot of anxiety around what reduced crop potential this is going to create.”

The almond industry met with Victorian officials during the week to find a solution. However, the meeting’s outcome was not positive.

“There is a refusal from Victoria to allow NSW bees in,” Jackson said.

“We have been unable to broker any sort of compromise or solution that would allow enough bees situated in NSW back into Victoria for this year’s pollination.”

An outbreak of varroa mite, a type of tiny external parasite that attacks and feeds on honey bees, occurred near Newcastle, north of Sydney, on June 22 and triggered a biosecurity lockdown on the movement of hives in several states.

Since then, the mite has spread to 79 premises throughout NSW, forcing authorities to set up several biosecurity zones in the state.

Restrictions Are Still In Place

As Queensland, South Australia, and Victoria placed restrictions on the movement of bees from NSW, Jackson said a lack of a coordinated approach between the states had caused frustration among almond farmers.

“Here we are with COVID all over again, where states are putting themselves ahead of the national interest,” he said.

“Victoria is magnified simply because of the volume of bees that are needed from NSW.”

At present, authorities do not issue permits to NSW beekeepers to move their bees into Victoria. However, they said the situation was being monitored, and permits could be considered when the risk eased.

A spokesperson for Agriculture Victoria said authorities were doing everything in their capacity to prevent the mite from entering the state.

“While the NSW government is still delimiting the extent of the spread of varroa in NSW, we need to take a precautionary approach to ensure we protect Victoria’s agricultural sector, beekeepers, regional communities and businesses.”

However, Jackson is calling on states to allow bees to be moved to low-risk areas within their jurisdictions under strict supervision.