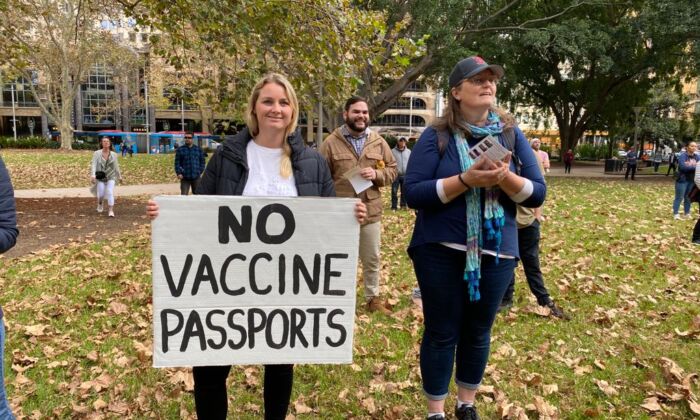 Rallygoer protesting against COVID-19 vaccine passports at the Worldwide Rally for Freedom, Peace, and Human Rights in Sydney, Australia on May 15, 2021. (The Epoch Times)
Australia

Australian MP to Introduce ‘No Vaccine Passport’ Bill to Parliament

SYDNEY – An Australian MP’s push for laws against COVID-19 vaccine passports has received support from a second MP, meaning it can be officially introduced to Parliament at the next sitting at the end of May.

Independent MP Craig Kelly announced on Saturday that his Bill would be seconded by the Liberal Member for Dawson George Christensen.

Kelly made the comments at a 1,000-strong rally in Sydney, which was held as part of a wider event called the Worldwide Rally for Freedom, Peace, and Human Rights.

“This morning at this rally in Brisbane. George Christensen, the member for Dawson and my good mate, confirmed he will second it,” Kelly said.

“But I will need your help. I will need you to get out there and talk to all your friends, your relatives, your acquaintances. Remember that courage is contagious,” he said.

“And I want you to ring your members of Parliament and get them to support this Bill,” he added. “These vaccine passports are nothing more than marketing gimmick of Big Pharma.”

“I will be railing against any attempt to have any vaccination passports, digital passports—whatever the label—that segregates Australians into haves and have nots and denies them jobs, denies them services, or denies them access to certain areas,” the website states.

Discussion around vaccine passports is in its early stages in Australia, with some entrepreneurs pushing ahead and setting up electronic services.

The European Union meanwhile is considering a “Digital Green Pass,” which has been backed by countries like Greece and Cyprus, who rely heavily on tourism.

However, the Australian federal government has not committed to a passport. Instead, it is opting to use the existing Australian Immunisation Register to keep track of those who have taken the vaccine.

Kelly is modelling his Bill on an April law passed under U.S. Governor Ron DeSantis in Florida.

“There are now 12 U.S. states that have introduced legislation to ban those vaccine passports,” Kelly told Sky News Australia,

The Florida law prohibits health authorities from issuing passports and bans businesses from asking customers to show any documentation proving they have been vaccinated or that they have recovered from COVID-19.