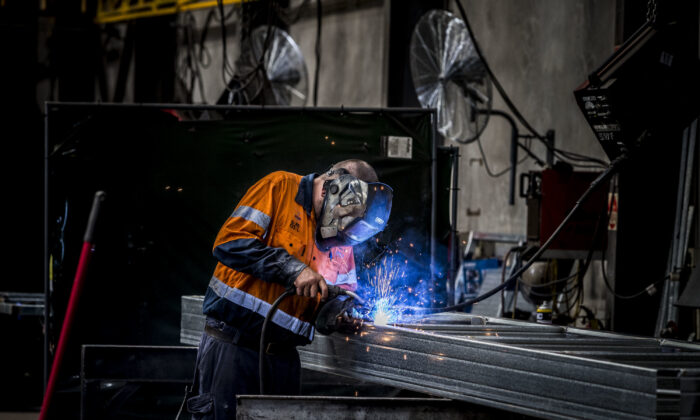 Manufacturing at a Brisbane factory in Australia, on Jan 25, 2017. (AAP Image/Glenn Hunt)
Australia

Australian Industry Group’s Manufacturing Index fell by 6.4 points to 48.4 during December and January, representing the challenges around staff availability and further disruptions to supply chains. A reading of below 50 points indicates a contraction of activity.

Ai Group Chief Executive Innes Willox said the fall in performance during the two-month period reversed the conditions reported in November when restrictions were eased in the south-east states.

“Cost pressures were keenly felt with input prices continuing to rise and the selling prices index indicating only a partial recovery of these costs in the market,” he said.

Three of six manufacturing sectors in the index reported positive conditions. The strongest results came from the building materials sector rising 6.5 points to 63.4, indicating a continuing boom in housing construction. In contrast, food and beverages plummeted 19.2 points down to 38.

Meanwhile, six of the seven activity indices for the performance index fell, with only sales increasing. Supplier deliveries plunged from 53.4 points in November to 37.8 points.

“December and January period was heavily influenced by the much higher level of COVID-19 infections and the jump in the number of people in isolation,” Willox said.

“The new orders index fell steeply pointing to a reduction of confidence among businesses dealing with new implications of the COVID-19 pandemic,” Willox said.

While business confidence fell across manufacturing, consumer confidence rose 1.7 percent during the last week of January after hitting the lowest reading since October 2020.

The ANZ-Roy Morgan consumer confidence index showed it was primarily driven by a jump in confidence in New South Wales after three weeks of decline.

The higher-than-expected inflation figures and falling unemployment rates have increased pressure on the Reserve Bank of Australia (RBA) to adjust its forward guidance on the interest rate outlook.

From the beginning of the pandemic to late-2021, the RBA indicated a cash rate rise would not occur until “at least 2024.”

The RBA will have its first monetary board meeting of the year on Tuesday.

It follows strong consecutive results in November (7.3 percent) and October (4.9 percent), and it remains above pre-pandemic levels.