Australian Man Arrested on Suspicion of Attacking a US Tourist 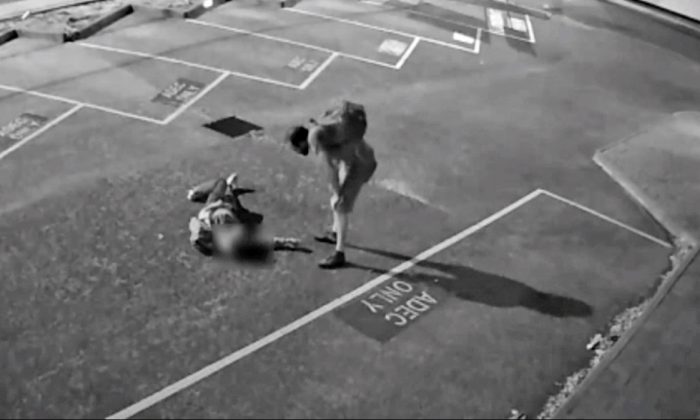 A still frame from closed circuit television surveillance footage shows a US tourist and his attacker in Melbourne, Australia, on March 27, 2019. (Courtesy of Victoria Police)
By Richard Szabo

A Victorian man has been detained for questioning about a terrifying attack on a U.S. citizen on March 27.

Victoria Police confirmed on April 2 officers have arrested a man in relation to an assault in Preston, 9 kilometers (6 miles) north of downtown Melbourne.

The 27-year-old man with no fixed address was located and taken into custody in the downtown area that same morning, and is already being interviewed.

“It is alleged the 32-year-old victim was followed after getting off a tram at the intersection of Bell Street and Plenty Road about 11.20 p.m. [local time],” a police spokesperson said in a public statement.

Closed-circuit television surveillance footage shows the victim walking through a car park, away from his attacker, when his assailant begins yelling and chasing him around the car park.

After knocking the victim unconscious, the attacker continued to strike him and then after appears to taunt the victim as he lies on the ground.

An American tourist has undergone brain and facial surgery after being attacked on the last day of his holiday in Melbourne. #9Today pic.twitter.com/tLn2lgYyii

The victim has undergone brain and facial surgery since the incident.

Police previously described the suspect as being in his early 30s with a slim build, short dark hair, a dark beard and “appears to be balding.”

At the time of the alleged assault, he was wearing a t-shirt with a white motif on the front and knee length cargo shorts. He was carrying a large backpack.

The Epoch Times contacted a police spokesperson, however, police were unable to provide any information on the motive of the attack. The matter is currently under active investigation.

“We will not be commenting on this incident further as it is now before the courts,” Victoria Police media officer Belinda Batty said in a written statement. “Media will need to follow the case in court.”

An American tourist has been left terrified after he was stalked and bashed while getting off a tram in Melbourne’s north. @NearyTy_9 #9News pic.twitter.com/6i2Ex2Y6ok

Police are hunting for the man behind a sickening attack on an American tourist who was chased and bashed in Melbourne. Security video shows the 32-year-old victim being beaten unconscious. #7NEWS pic.twitter.com/FWxuarX6Bo

Since the arrest was shared on social media, several concerned citizens have openly expressed their thanks to the police officers who responded.

“Well done guys. We have the best police force in the world. You always get results,” Gary Osborn said in a comment to the arrest footage. “It may take a while, [but] you always find the perpetrator.”

“Great work … now lock him up never to be released,” Ornella Pesavento said. “Of no fixed address … he can now have a home in jail.”

Others hoped the suspect would not be released on bail before the investigation could reach a proper conclusion.

“Great work by police. Now for the magistrate to lock him up and not let him out on parole,” Litsa Alfonzetti said.

Anyone who may have witnessed the incident, or has any information relating to the identity of the unknown man, is encouraged to contact Crime Stoppers by phoning 1800 333 000 or submitting a confidential crime report online.