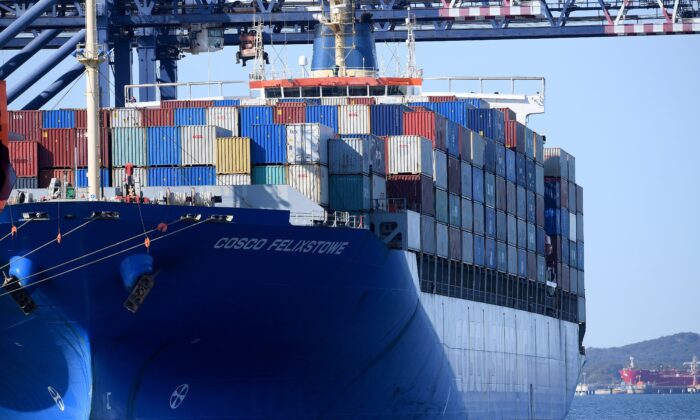 Announcing the policy on Jan.3, Albanese said that as a sea locked country, Australia is more dependent on maritime trade than most, with shipping used to transport almost all of Australia’s imports and exports.

Yet despite Australia’s reliance on maritime trade, he noted that only 1 percent of the country’s imports and exports are transported in Australian owned ships. A fact that is concerning the Labor leader said when considering that this makes Australia reliant on other countries to transport essential imports such as fuel.

“For eight long years, the Morrison-Joyce Government has put our national security and economic sovereignty at risk by standing idle as large multinationals dumped Australian flagged
and crewed vessels so they could hire cheaper overseas crews,” Albanese said.

“This has destroyed the jobs of Australian seafarers and created a situation where none of the vessels our nation relies upon to deliver its essential supplies of crude oil, aviation fuel and diesel are registered in this country or crewed by Australians.”

Albanese noted that the COVID-19 pandemic had exposed the weaknesses in Australia’s supply chains and highlighted the nation’s dependence on foreign suppliers and transporters for critical commodities.

“Without a strategic fleet, Australia’s essential supply lines—including fuel imports—are vulnerable to the decisions of foreign governments or the whims of international shipping companies,” Albanese said.

Labor is proposing that if elected, they will establish a task force to focus on the revival of Australia’s shipping industry.

“This Taskforce will include representatives from the shipping industry, major charterers, unions, Australian business and the Department of Defence,” said Albanese.

It will also be in charge of establishing the new fleet, which will be composed of a dozen vessels, including roll-on roll-off, container, tankers, and cargo ships. It is also most likely be privately owned and commercially operated. However, in times of national crisis, Labor said that they would ensure there are provisions for the Australian Defence Forces to have access to the ships.

The Taskforce will also determine how to enforce coastal shipping laws and close loopholes in Australia’s regulatory framework. Additionally, they will determine what reforms are
necessary to boost the maritime industry.

It is unclear how Labor intends to account for the environmental impact that a larger shipping industry could have on Australia’s marine life. However, the opposition leader said that Australian maritime workers’ local knowledge should prevent the environmental disasters that have occurred with the foreign flagships.

The Maritime Union of Australia (MUA) has welcomed the promise from the Labor party, saying that it is essential for Australia to have a measure of certainty around trade. Paddy Crumlin, MUA National Secretary, noted that Australia could not allow itself to be held hostage to international shippers whose priorities may not align with our own.

“A national strategic fleet could be employed transferring our strategic fuel reserve from its current location, in the US, and bringing our fuel to Australia where it will be in high demand in the event of an international crisis or disaster,” Crumlin said.

The announcement comes after Ports Australia, the national peak Australian body representing government and privately owned ports, previously signalled in a submission (pdf) to the federal productivity commission in May 2021 that Australia was overly reliant on foreign-flagged vessels for its imports, exports and coastal shipping.

“Major Australian-flagged vessel numbers have significantly declined in recent decades, with now only around 15 in operation. Should a circumstance arise that requires the withdrawal of a company’s vessels for international trade to or from Australia, this would pose a significant limitation on Australia’s ability to continue trade as only a few shipping lines service Australia. Withdrawal could occur from such circumstances as a company’s changes focus or insolvency or a nation’s geopolitical decisions,” the submission read.