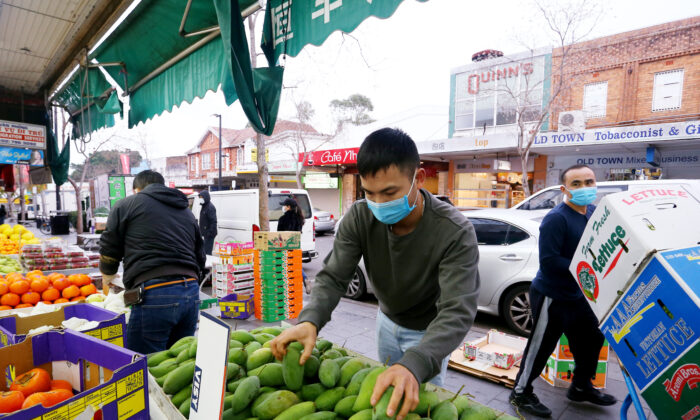 Workers wear face masks as they set up displays at a local fruit and vegetable market in Sydney, Australia, on July 9, 2021. (Lisa Maree Williams/Getty Images)
Australia

Australia’s Health Minister Mark Butler says the government has no plans to continue pandemic leave payments for individuals that must take time off work after contracting COVID-19.

Butler told ABC Radio National on Friday that the federal government did not have the financial capability to continue funding the emergency payments, which came to an end on June 30.

This is despite the fact Australians who contract COVID-19 will still be expected to isolate for seven days and potentially force workers to take sick leave, or leave without pay, to cover their isolation period.

“At some point in this pandemic, and we are reaching that point, we are going to have to start lifting emergency measures,” Butler said noting that Australians had been told well in advance about the end of the pandemic measure.

“We’ve got a trillion dollars of debt and there’s simply not the financial capacity to continue to fund these emergency measures forever.”

However, when asked if financially vulnerable Australians could be forced to work with while COVID-19 positive, Butler said he hoped not.

“Well, we hope not, you know there will be orders for them not to,” he said.

Unions Highly Critical of the Move

The government’s decision has been met with criticism from the Australian Council of Trade Unions.

“It is a mistake to stop paid pandemic leave,” according to Secretary Sally McManus.

“Workers without paid sick leave are required to isolate for seven days and will now suffer a severe financial penalty for doing so. Removing support for people to isolate is a surefire way to increase the spread of the virus,” she wrote on Twitter.

It is a mistake to stop paid pandemic leave. Workers without paid sick leave are required isolate for seven days and will now suffer a severe financial penalty for doing so. Removing support for ppl to isolate is a sure fire way to increase the spread of the virus.

The health minister is also pushing for increased use of antiviral treatments for COVID-19 to alleviate stress on the hospital system.

The Pharmaceutical Benefits Advisory Committee has been tasked with reviewing the eligibility criteria for access to antiviral therapies.

“I don’t think still there’s a great level of awareness about these treatments out in the community, which is why I’ve tried to talk about it a lot over the last couple of weeks,” Butler said. “So lifting awareness, lifting information in the broader community and among GPs for that matter, is something we’re very focused on.”