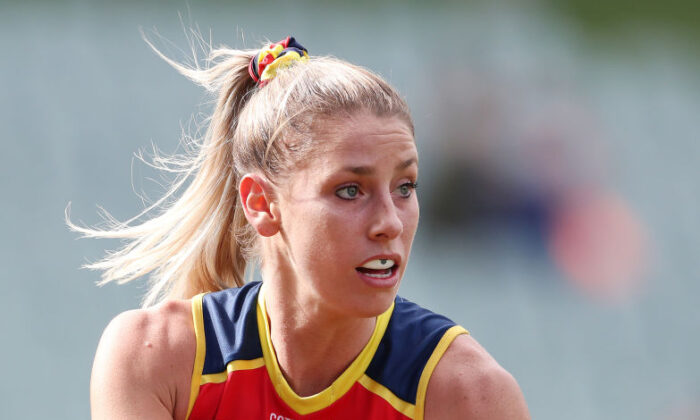 Deni Varnhagen of the Crows runs with the ball during the 2021 AFLW First Preliminary Final match between the Adelaide Crows and the Melbourne Demons at Adelaide Oval, in Adelaide, Australia, on April 10, 2021. (Sarah Reed/AFL Photos via Getty Images)
Australia

Deni Varnhagen, a registered nurse and Australian rules football player has been placed on her team’s inactive list for the upcoming season after refusing to receive the COVID-19 vaccination.

Varnhagen has publicly opposed the Australian Football League’s (AFL) vaccine mandate, which required all players and staff to receive their first dose by Nov. 19, and the second by Dec. 17.

The 29-year-old is also a registered nurse in intensive care units and faces the possibility of also losing her job in the health sector once its vaccine mandate deadline passes.

The CEO of the Adelaide Crows Women’s team, Tim Silvers, said the club had adopted a “team-first” approach, and the decision was made in the “best interests of the team” for the upcoming season.

“Our club supports the league’s policy, and we strongly encourage people to be vaccinated for the benefit of community health and safety,” he said in a statement.

“We would like to acknowledge and thank Deni for the significant contribution she has made to our women’s program over the past five seasons.”

Varnhagen was a member of the Crows’ inaugural team and has played 31 games, including the 2017 and 2019 premierships.

The AFL, the country’s largest sporting competition, has taken a firm stance on vaccine mandates, announcing in October that all men’s team players and staff needed to be vaccinated by mid-February.

Its competitor, the National Rugby League (NRL), has ruled out vaccine mandates, but warned unvaccinated players they could face stringent protocols.

The NRL’s stance has come amid opposition from the code’s many Polynesian players, who are also religious.

Meanwhile, on Nov. 2, Varnhagen joined nurses in Adelaide protesting South Australia’s vaccine mandate against healthcare workers, which came into effect on Nov. 1—391 health professionals in the state are yet to be vaccinated.

She told reporters, “We are all terrified. We love working; we just want to be back working.”

“No one should be at threat of losing their jobs if they don’t enter a medical experiment.”

Vaccination deadlines in the health sector have expired across the country over the last week, with thousands of medical professionals suspended or stood down from their positions by state health authorities.

Tasmania stood aside 170 health workers on Nov. 1 after they failed to comply with the state’s vaccine mandate. In Queensland, 4,000 health workers have been suspended and ordered to show cause for why they have not received the vaccine.

While in Victoria, the Federal Court of Australia cleared the way for Monash Health to take disciplinary action against 90 nurses refusing the jab.