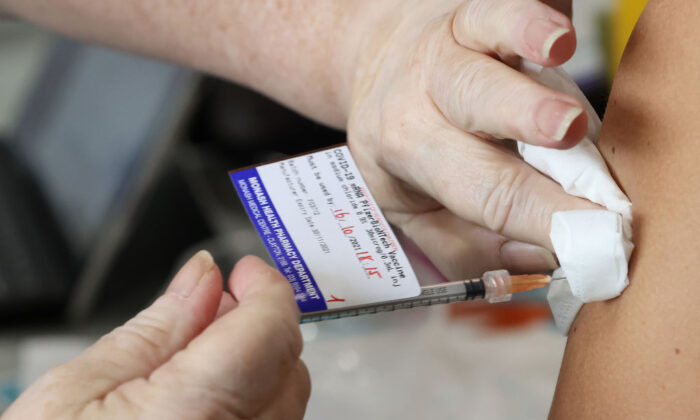 A nurse administers a COVID-19 vaccination at the Casey Fields pop up vaccination clinic in Melbourne, Australia, on Oct. 16, 2021. (Robert Cianflone/Getty Images)
Australia

One of Australia’s largest public health services has received the go-ahead by the Federal Court to take disciplinary action, including dismissal, against a group of nurses who failed to meet Victoria’s mandated vaccine deadline.

Around 90 nurses tried to block the action arguing they had the right to be consulted about Monash Health’s mandatory vaccination directive.

Under sweeping government-mandated health orders, all Victorian healthcare facilities must collect information on the vaccination details of workers by Oct. 15. Workers must also have received their first dose of the vaccine by Oct. 29, and their second dose by Dec. 15.

The nurses sought a court-ordered injunction to stop any disciplinary action from being taken, however, the presiding judge, John Snaden, found against them saying their legal case was weak.

The nurses are simultaneously progressing a legal case against the vaccine mandate in the court.

Nick Ferrett Q.C., the barrister for the nurses, argued that Monash Health should have consulted the nurses first to explore whether they could get vaccinated and continue working.

He argued that since Monash Health had the resources to interview employees for disciplinary reasons—which he anticipated would occur—then consultation was possible too.

Justice Snaden found instead that the lack of consultation did not prevent the nurses from exercising their workplace rights.

Further, he said Monash Health was only following the state’s public health orders.

“The course that has been plotted, has been plotted because Monash Health has formed the view the public health directions, by which it is bound, do not permit anything else,” Snaden said.

He conceded that disciplinary action and potential dismissal would create significant difficulties for the nurses, but in his view, their case was too weak to justify the granting of an injunction.

The full case will be listed for trial before a different judge later.

The Victorian case comes the health department of another state, Queensland, suspended 4,000 medical professionals after they failed to meet the mandated vaccine deadline of Oct. 31.

Queensland Health Minister Yvette D’Ath revealed that around 10 percent of the 100,000-strong public health workforce had yet to be vaccinated.

D’Ath maintained that the system could cope with a major drop in its workforce numbers.

Campbell Newman, former premier of Queensland and now-Senate candidate, was sceptical, however.

“The idea of 4,000 people suddenly not being available in the system is going to cause huge problems, and those that will suffer will be patients, which is just ludicrous,” he told The Epoch Times.

In April, a 7-year-old girl died from a high fever after a two-hour-long wait in the emergency department before she was treated.