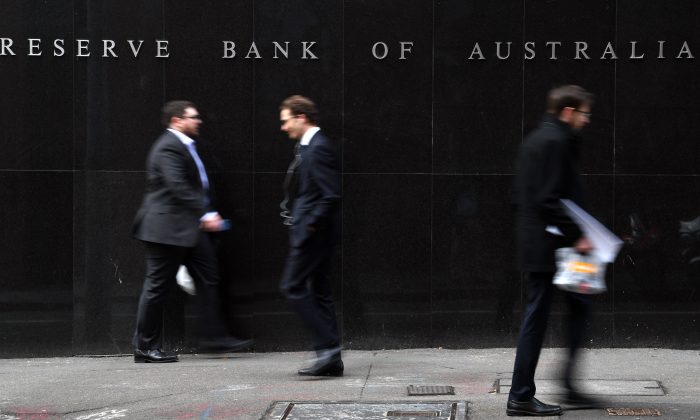 Office employees walk in front of the Reserve Bank of Australia in Sydney on Sept. 4, 2018. (Saeed Khan/AFP/Getty Images)
Australia

Both economists and the Reserve Bank of Australia (RBA) are maintaining their positions on their respective forecasts for the economy after a strong recovery post-Delta.

In its quarterly Statement on Monetary Policy (SOMP), the RBA said the economy bounced back strongly after Delta lockdowns and the effect of Omicron on spending has been “relatively small.”

The central bank also upgraded its economic and inflation forecast, and downwardly revised its forecast for unemployment to eventually fall under four percent.

“Backed by the Morrison government economic plan, which kept businesses in business and Australians in jobs during the greatest economic shock since the Great Depression, Australia has outperformed every major advanced economy and is well on the road to recovery,” Treasurer Josh Frydenberg told AAP.

The statement reiterated that the board was “prepared to be patient” and monitor how the various factors affecting inflation in Australia will evolve before raising interest rates.

This includes keeping an eye on wages growth, which according to its liaisons, is not expected to move beyond the two to three percent range this year. The December quarter wage price index (WPI) will be published on Feb. 23.

Westpac Chief Economist Bill Evans said it was surprising that business liaisons did not anticipate for wages growth to move beyond the two to three percent range, while there were “acute labour shortages” in pockets of the economy.

But economists have not changed their previous expectations that the first cash rate hike will occur during the second half of this year.

Commonwealth Bank economists believe there is “considerable scope” for inflation and wages data over the first half of 2022 to be stronger than the RBA has forecast.

“This leaves us comfortable with our call that the RBA commences raising the cash rate in August 2022,” Commonwealth Bank Head of Australian Economics Gareth Aird said. “We expect it to be a shallow and gradual tightening cycle given the elevated level of household indebtedness.”

ANZ Bank economists believe the RBA is “too pessimistic” on wages, as underutilisation of labour has fallen and is expected to fall further according to labour market indicators. These factors point to further wages growth gains.