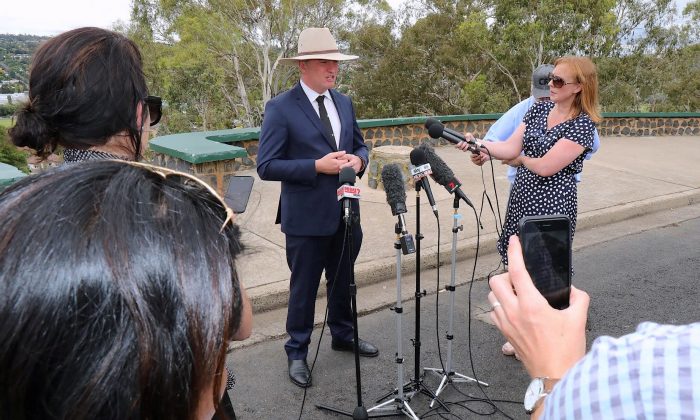 Barnaby Joyce has announced his resignation as Deputy Prime Minister and leader of the Australia National Party during a press conference on Friday, Feb. 23.

Joyce told reporters gathered in Armidale — the rural town in Joyce’s electorate of New England about 485 km (300 miles) northeast of Sydney — that he will step down as the leader of the National Party on Monday. Joyce said he will move to the backbench, safeguarding the Turnbull government’s one-seat majority. The decision comes following weeks of pressure over his controversial affair with former media secretary Vikki Campion.

“I will say on Monday morning at the party room I will step down as the leader of the National Party and deputy leader of Australia,” Joyce said at the press conference.

He said he decided to resign after an allegation of sexual harassment from a Western Australian woman emerged on Friday. Joyce has denied the allegations made in the complaint.

“Over the last month, there has been a litany of allegations, I don’t believe any of them have been sustained,” Joyce told reporters, reported 7News.

“It was after the allegations I read in the paper, I thought that had to be the straw that breaks the camel’s back,” he added.

National Party federal director Ben Hindmarsh said the party had received the sexual harassment allegation but declined to give any details.

A spokesman said Joyce had been made aware of the claim indirectly and believed it was “spurious and defamatory.” Joyce had asked for the allegation to be referred to police, the spokesman said.

Joyce also asked the public to give his current partner, Vikki Campion, who is pregnant with their child, and his estranged wife Natalie and family some privacy.

“This has got to stop, it’s not fair on them, it’s just completely and utterly unwarranted.”

Joyce, a practising Catholic, has been married for 24 years with wife, Natalie, and had campaigned on family values.

Joyce said at the conference that he will be keeping his seat of New England.

I will continue to fight for the people in the weatherboard and iron, for the people on the peripheral and the small regional towns. I used my experience of these towns and my goal in life will always be to try to make their lives better.

“To give these people in the weatherboard and iron, in those regional and small towns the best opportunity, this current cacophony of issues has to be put aside,” he added.

Prime Minister Malcolm Turnbull who is in the United States for bilateral talks with President Trump was informed about Joyce’s decision 30 minutes before the announcement. He thanked Joyce for his service in a statement on Friday, reported the news station.

“I thank Barnaby for his service as deputy prime minister and in his various ministerial roles in which he has been a fierce advocate for rural and regional Australia,” Turnbull said.

Turnbull last week spoke on Joyce’s affair with Campion and called it a “shocking error of judgment.” He also made changes to the Ministerial Code of Conduct as a result of the incident.

The National Party will now elect a new leader, who will also become deputy prime minister under the terms of the coalition agreement with Turnbull’s Liberal party.