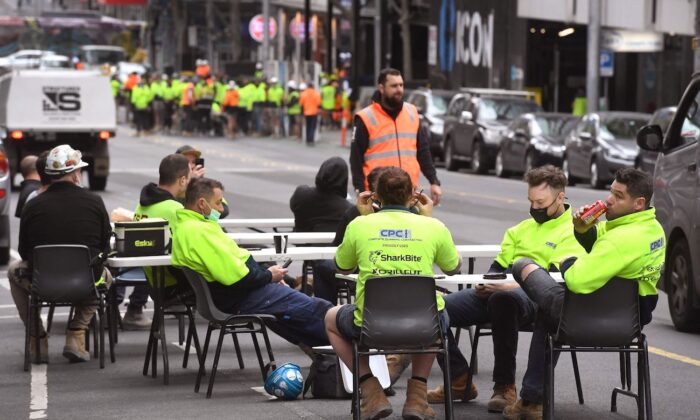 Construction workers take their lunch break on a busy street in Melbourne, to protest the closing of their onsite tea rooms by the state government, on Sept. 17, 2021. (William West/AFP via Getty Images)
Australia

Dozens of construction workers blocked Lonsdale and Elizabeth streets with chairs and tables while on their breaks, stopping the trams, video on social media show.

“Dan Andrews said that Victorian construction works couldn’t eat inside if they werent vaxd… So – they grabbed everything and took it to the streets and blocked the roads off – they even got Traffic Control stopping Police,” a separate post on Telegram, filled with pictures of the protest, reads. “Well done Tradies of Melbourne.”

Another video showed a construction worker saying that Spencer street was also temporarily affected. “No jab, no job, see ya later,” he said in the video.

The roads have since been cleared. One video posted by independent journalist Rukshan Fernando, who goes by the name Real Rukshan on social media, showed the construction workers packing up the tables and chairs after their peaceful sit-in.

“Speaking to people from these worksites off camera, they have a mix of views and concerns, mandatory vaccination is one of them (however the unions don’t publicly support them on this matter),” Fernando reported.

The largely-silent protest comes a day after Victorian Premier Daniel Andrews announced that construction workers “will need to show evidence to their employer that they have had at least a first dose of a coronavirus vaccine by 11:59 p.m. on the 23rd of September.”

“Basically, construction workers have a week to go and get a first dose.”

Victoria’s vaccination mandate for the industry comes as officials say 13 percent of active cases in the state are linked to construction sites.

Also, from 11:59 p.m. this Friday, construction workers will not be able to cross the metropolitan-regional boundary for work, tea rooms will be shut, any food or drink will not be able to be consumed indoors at work, according to the new restrictions.

“If they want to work and be part of that 25 percent, they need to be vaccinated with one dose by midnight next Thursday night,” he said. “If they’re not, they won’t be able to come on-site.”

“It’s not really a protest,” he claimed on 3AW radio on Friday. “What they decided was if we can’t sit in the smoko shed, where do we have our break? So they’ve taken all the tables and chairs out into the fresh air.”

“They’ve got nowhere else to have their smoko.”

Setka told 3AW earlier this week that CFMEU would not support the use of mandatory vaccines.

“I don’t support anything being compulsory,” he said on Tuesday. “People have genuine health concerns, but I believe we should listen to the experts.”

“There are some people with legitimate health concerns over being vaccinated, and I think we’ve got to respect that.”

When asked if the union would represent workers laid off because of refusing vaccination, Setka said, “We will take each case.”

“We’re trying to rotate people coming in and out, but we’re suffering as an industry pretty badly at the moment. We realise how important we are to the economy, and it’s very important for us to keep working.”

Meanwhile, Jeroen Weimar, the COVID-19 Commander, defended the decision to place restrictions on tea break rooms as there is a “significant risk of transmission” in them.

“So many employees would love to be at work … people are bending over backwards to keep the construction industry going and keep important sites going for important reasons,” he said.