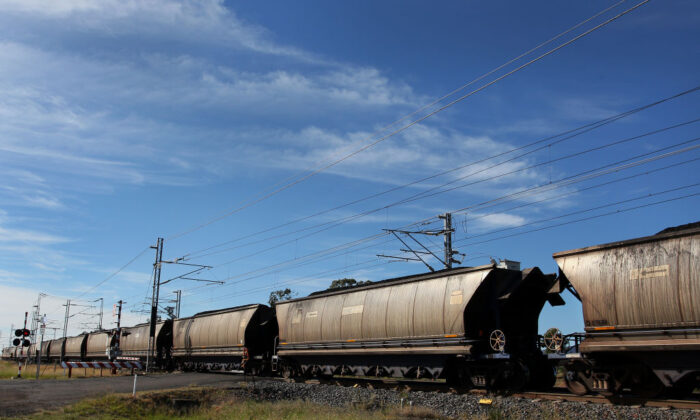 A coal train is seen moving parallel to the A4 Highway in the Clermont and Blackwater region in Queensland, Australia, on April 29, 2019. (Lisa Maree Williams/Getty Images)
Australia

Currently, coal mining companies are calling on the Queensland government to be transparent about how much the state government will tax them in 2022-2023, even though the new financial year is approaching.

Queensland Treasurer Cameron Dick said that the tax on each tonne of coal sold, also known as royalties, imposed on miners would rise in the 2022-2023 financial year after what he called a decade-long freeze.

“Obviously, that resource belongs to the people of Queensland, and now we’re looking at what that might look like in the future,” Dick told reporters.

While announcing the change, Dick has not disclosed the size of the increase in royalties.

The QRC said Dick refused to tell miners how much the new royalty rates would be in a meeting on June 8.

“(That) flies in the face of Premier Annastacia Palaszczuk’s promise to be an open and transparent government,” the QRC said in a statement obtained by AAP.

“The coal industry is facing a rate rise in two weeks and does not know what to expect.”

While the QRC warned that a hike in royalty would push foreign investors away from the market, the treasure said that situation would not occur and emphasised that he was still a friend of the mining industry.

“But the point of being a friend, and the value of friendship, is being able, to tell the truth,” Dick said.

“And the truth is that these companies have been making very significant amounts of money.”

Meanwhile, Queensland will lift the gambling tax on bets from 15 percent to 20 percent on July 1.

The state government is also anticipated to receive interest earnings from a fund holding rental bonds in 2022-2023.

The above developments will generate an additional $200 million for the state to spend on new roads, sewerage systems and other infrastructure.

Queensland Deputy Premier Steven Miles said that more homes would be built with the construction of new public infrastructure.

“Once that infrastructure is there, developers tell us that they will be able to open up those lots,” he told reporters.