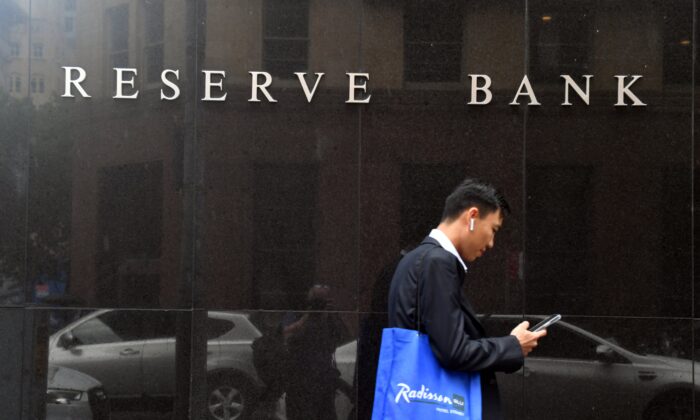 A pedestrian walks past the Reserve Back of Australia head office in Sydney, Australia, on Dec. 7, 2021. (AAP Image/Mick Tsikas)
Australia

The Reserve Bank of Australia (RBA) has decided to maintain the cash rate at 0.1 percent and end its bond purchase program on Feb. 10 at the first board meeting of 2022.

While inflation increased faster than the RBA expected, uncertainties remained on how persistent the pick-up inflation will be once supply issues are resolved and wages growth also remains modest, Lowe said.

The RBA forecasts that underlying inflation, currently at 2.6 percent, will further increase to around 3.25 percent before falling to 2.75 percent over 2023 once supply-side problems are fixed and consumption patterns normalise.

Westpac Chief Economist Bill Evans criticised the RBA for having a rhetoric that “does not seem to be consistent with the forecasts.”

He noted that Lowe said it was “too early to conclude inflation was sustainably within the target bank,” yet made inflation predictions where it would surpass the inflation target across 2022-23.

“That is inflation is forecasted to hold in the upper half of the target band for at least two years!” Evans said. “These tactics are clearly to dissuade markets from getting too far ahead of themselves in anticipating higher rates.”

Economists from the big four banks are expecting the first rate hike to occur in the late-2022, however, Lowe said the board was “prepared to be patient” as it monitors the evolving factors affecting inflation.

The RBA noted that the labour market has recovered strongly since the initial shock of the pandemic, falling to 4.2 percent in December. It expects the unemployment rate to fall below 4 percent later in the year and further down to 3.75 percent at the end of 2023.

Wages growth also remains modest and has returned to low rates relative to pre-pandemic levels, but it is expected to pick up as the labour market tightens.

“This pick-up is still expected to be only gradual, although there is uncertainty about the behaviour of wages at historically low levels of unemployment,” Lowe said.

The RBA forecasted for GDP growth of 4.25 percent in 2022 and 2 percent over 2023, an outlook supported by positive balance sheets, the upswing in business investment, and supportive economic policies.

“The Omicron outbreak has affected the economy, but it has not derailed the economic recovery,” Lowe said. “The Australian economy remains resilient and spending is expected to pick up as case numbers trend lower.”

The persistence of disruptions to supply chains and distribution remains a source of uncertainty in the economy. It is also difficult to foresee how consumption patterns will evolve and their effect on prices and inflation.

RBA board maintains a supportive stance for supportive monetary policies to help Australia return to full employment and inflation consistent with the target.

ANZ Bank Head of Australian economics David Plank believes the RBA will get its wanted confirmation from wages with the June quarter wage price index, to be published in mid-August.

“With policy extremely stimulatory we think the RBA’s initial moves will be quite quick,” Plank said (pdf). “We see the cash rate at 0.75 percent by November 2022, rising to 2 percent by the end of 2023.”