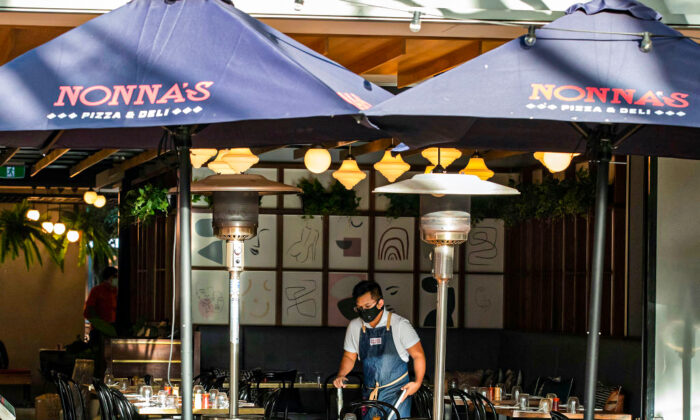 A worker cleans while wearing a mask at a restaurant at Southbank, Brisbane in Australia, on June 29, 2021. (Jono Searle/Getty Images)
Australia

Small business owners in the Australian state of Queensland are calling for the state government to review COVID-19 mandates after the state reached 90 percent vaccination rate more than six weeks ago.

After two years of mandates and disruptions, data from the Chamber of Commerce and Industry Queensland (CCIQ) indicates that business confidence is at its lowest levels since the start of the pandemic.

Amanda Rohan, CCIQ’s general manager of policy and advocacy, said the state government promised a vaccine mandate review when the 90 percent vaccination milestone was reached but that do date there had been no certainty as to what the review included, what it meant for businesses, or if it happened at all.

“For close to two years Queensland communities have been doing everything they’ve been told to, everything they can, to get to this point in the state’s COVID recovery,” Rohan said in a release on March 22.

“Now is the time for government to level the playing field and bring businesses, their staff, customers, and communities still operating under the vaccine mandates into line with those businesses operating without any restrictions.

“Interstate and international tourists can travel about the state, mask rules have been relaxed, and the double vaccination rate is well over 90 percent,” she said.

CCIQ and businesses across the state are calling on Premier Annastacia Palaszczuk and Small Business Minister Di Farmer to review mandates.

“Business have done their bit, now the state government needs to do their bit and deliver the review businesses were promised,” Rohan said. “We’ve been calling for this review since January but now businesses are desperate to know what’s next and how they can plan ahead.”

Amid supply chain disruptions, staff shortages, and consumer behaviour, Rohan said any opportunity to review red tape and mandates for businesses was “essential.”

“Let’s show our local and visiting communities we are open for business and support Queensland businesses who are ready to get back to what they do best supporting their staff, customers and communities,” Rohan said

The Epoch Times reached out to the office of the Queensland Small Business Minister but did not immediately receive a response to a request for comment.