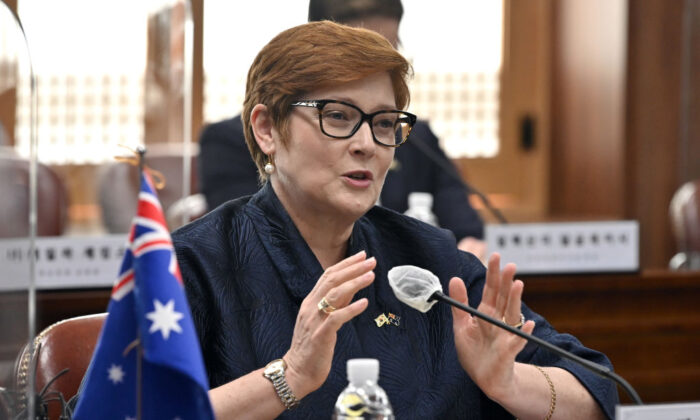 The Australian government has not ruled out imposing further sanctions on Burma (also known as Myanmar) after the United Kingdom, Canada, and the United States jointly placed sanctions on seven individuals and two entities connected to the Burmese military junta on the anniversary of its coup.

“Australia’s autonomous sanctions regime already includes a longstanding arms embargo against Myanmar, as well as targeted sanctions against five individuals with direct responsibility for atrocities in Rakhine State,” a spokesperson for Australia’s Department of Foreign Affairs and Trade (DFAT) told The Epoch Times.

“Australia continues to keep its sanctions regime under active consideration, and further sanctions have not been ruled out.”

This comes after U.S. Secretary of State Antony Blinken said on Feb. 1 the Biden administration was coordinating with the UK and Canada to demonstrate the international community’s “strong support” for the people of Burma and to promote “accountability for the coup and the violence perpetrated by the regime.”

The move marks a potential shift in DFAT’s public position after Foreign Minister Marise Payne told a Senate estimates hearing (pdf) on foreign affairs, defence, and trade legislation in last October that Australia did not think it was prudent to impose further sanctions on Burma given the country’s advocacy on an ASEAN-led solution.

Currently, ASEAN has called on the junta to abide by a five-point plan that involves the immediate cessation of violence in Burma and the creation of a constructive dialogue among all parties concerned to seek a peaceful solution. The dialogue would be overseen by a specially created envoy including the ASEAN chair and the secretary-general.

ASEAN also wants the Burmese junta to provide humanitarian assistance and allow a special ASEAN envoy and delegation to visit the country to meet with all of the concerned parties.

At present, these requests have been ignored.

In a statement on Feb. 1, Payne said the Burmese military junta had denied the will of the country’s people and that its seizure of power had “inflicted horrific violence, trampled basic freedoms and triggered humanitarian, security, health and economic crises across the country.”

“Australia condemns the use of violence against civilians and other serious human rights violations,” Payne said. “We reiterate our call for the military to allow immediate and unimpeded access for the delivery of humanitarian assistance to all people in need. We also call on the military to engage meaningfully in inclusive dialogue for a peaceful return of Myanmar to the path of democracy.”

The foreign minister also called for the release of Australian man, Prof. Sean Turnell, who was an advisor to Aung San Suu Kyi, who has been detained since the coup in February last year.