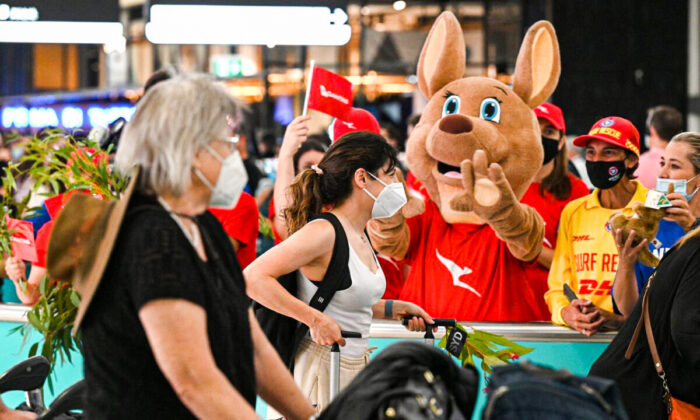 A mascot welcomes passengers upon arrival at the Sydney International Airport in Sydney, Australia, on February 21, 2022. (Saeed Khan/AFP via Getty Images)
Australia

International tourists have started arriving in Australia for the first time after two years of closed borders, triggering emotional reunion scenes between family and friends across the country.

Travelers stepping out of aircraft at the Sydney airport were greeted by joyful well-wishers waving Tim-Tams, jars of Vegemite, and stuffed koalas as the Australian government removed international border restrictions on Feb. 21.

Federal Tourism Minister Dan Tehan was also present at the airport to welcome the first international tourists from Los Angeles who arrived on a Qantas flight at 6:30 a.m.

“What wonderful, wonderful news for our tourism industry and the 660,000 people employed in it,” Tehan told the Nine Network.

“There is excitement everywhere, people are loving it, absolutely loving it.

“The first passenger (to enter the arrivals hall) had a huge smile on their face even though they have been on a plane for … 20-odd hours,” he said.

However, Home Affairs Minister Karen Andrews stated that the department would check all travellers before they arrived in the country to prevent another Novak Djokovic visa incident.

Andrews said that while optimism had spread over the reopening of the Australian border, Border Force agents would be working hard to make sure every international arrival conforms to the country’s current requirements, including getting double jabbed.

According to the home affairs minister, airlines would check passengers’ vaccination statuses before taking off, and officers could access documents of international travellers easier with the help of the new digital passenger declaration.

“When they reach Australia, there is every chance that an Australian Border Force official will look for their documentation and ask them to be able to produce it,” she told the ABC.

“Now, whilst we’re not checking every single person coming in at the border, the checks prior to entry make it very clear that you have got virtually no chance of being able to enter this country if you don’t have the proper documentation.”

Qantas CEO Alan Joyce said the company had seen strong bookings since the federal government’s announcement of opening the country’s border on Feb. 21.

“It has been tough two years for everybody in the tourism industry, but today is really one of the big steps on the way back to a full recovery, so we are very excited about today,” he told the Nine Network.

Joyce said 14,000 people would arrive in Australia in the week commencing Feb. 21 on over 150 international Qantas flights.

Prime Minister Scott Morrison said Feb. 21 was a significant day and that all Australians had looked forward to it.

“Whether you are in far north Queensland or in Sydney … that is going to be welcome news for so many tourism operators,” he told Sydney’s 2GB.

“You don’t have to be a long way away from the city to be reliant on international tourism.”

The prime minister said that 1.2 million people worldwide had got visas to come to Australia, and more than 50 international flights would land in the country in the next 24 hours.

Nevertheless, the country would witness an absence of Chinese travellers as people from Australia’s largest tourism market were currently barred from entering, Morrison said.

“That’s why we’re focusing our campaign on those markets that are open to travel to Australia,” he said.

Meanwhile, Victoria launched its newly built $200 million (US$144 million) quarantine hub on Feb. 21 for unvaccinated international travellers, while Queensland was likely to vacate its 500-bed quarantine centre near Toowoomba for the same purpose.