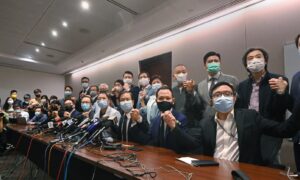 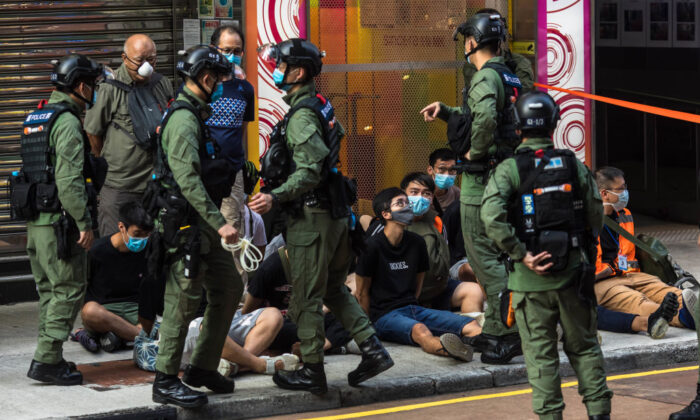 Police detain people as they patrol the area after protesters called for a rally in Hong Kong on Sept. 6, 2020. (Dale De Lay Rey/AFP via Getty Images)
Australia

The move is seen as undermining the legal agreement set out in Hong Kong’s Basic Law and the Sino-British Joint Declaration which gives Hong Kong autonomy from the totalitarian communist regime that rules in mainland China.

“Australia calls on authorities to allow the Legislative Council to fulfil its role as the primary forum for popular political expression in Hong Kong, and to remain a key pillar of the rule of law and the “One Country, Two Systems” framework,” Payne said on Nov. 12. “This is critical to maintaining international confidence in Hong Kong.”

The duly elected Hong Kong lawmakers were disqualified after Beijing passed a resolution during the National People’s Congress Standing Committee on Nov. 10 and 11 that would allow the local government to remove lawmakers deemed a threat to China’s national security under new laws targeting acts of secession and sedition.

In response to the CCP’s power move, all 19 pro-democracy Hong Kong lawmakers resigned from the Legislative Council.

Wu Chi-wai, the convener of the pro-democracy camp, said during a press conference that he resigned in solidarity with his colleagues who were disqualified by the CCP.

“Although we are facing a lot of difficulties in the coming future for the fight of democracy, but we will never, ever give up,” Wu said.

“This undermining of Hong Kong’s principal forum for political participation follows an alarming pattern of suppressing opposition voices,” she said. “Labor is deeply concerned by the continuing erosion of Hong Kong’s high degree of autonomy as guaranteed in the Basic Law and the Sino-British Joint Declaration, to which China is committed.”

The UK, China’s partner in the Sino-British Joint Declaration, has declared China in breach of the declaration and said that it, along with its international partners, will hold China to its obligations under international law.

This is the third time that the CCP has breached the declaration, according to the UK.

“The UK will stand up for the people of Hong Kong, and call out violations of their rights and freedoms,” Raab said.

Canada and the United States also issued warnings over the move by Beijing.

U.S. National Security Adviser Robert O’Brien said Nov. 11 that because the decision by the CCP to disqualify lawmakers violated its international commitments and promises to the people of Hong Kong, the United States could impose more sanctions on Hong Kong and Chinese officials over the action.

“The United States will continue to utilize all the powers granted under the Hong Kong Human Rights and Democracy Act, the Hong Kong Autonomy Act, and the Executive Order on Hong Kong Normalization to identify and sanction those responsible for extinguishing Hong Kong’s freedom,” he said.

Canadian Minister of Foreign Affairs François-Philippe Champagne said the removal of the lawmakers was an assault on Hong Kong’s freedoms.

“China’s decision to remove four democratically elected lawmakers from office in Hong Kong is a further assault on Hong Kong’s high degree of freedoms under the Sino-British Joint Declaration,” he said. “We are deeply disappointed that China has chosen to break its international obligations.”