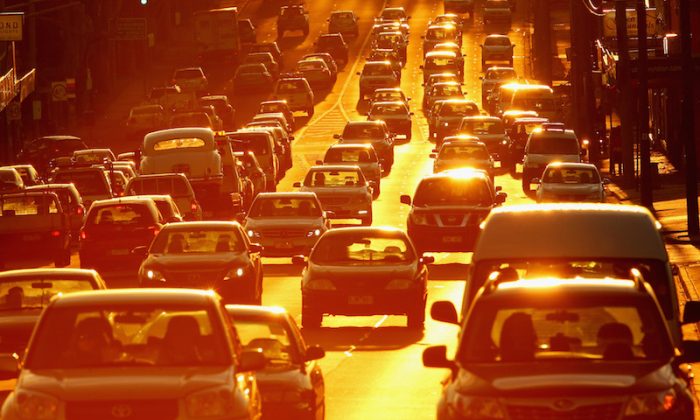 Australia to Shuffle New Migrants Away From Overcrowded Cities

A new visa condition will require new migrants to settle outside Sydney, Melbourne, and southeast Queensland for up to five years, according to the Morrison government’s four-point plan to address over-population in the east coast’s population hubs.

The new visa condition would apply to about 45 percent of the total migrant intake—notably, migrants not bound to settling in a particular location. The visa would not apply to those who are sponsored by companies or those on family visas.

Population and Urban Infrastructure Minister Alan Tudge outlined the government’s four-point plan in a speech delivered at the Menzies Research Centre in Melbourne on Oct. 9.

"Our nation is adding a city the size of Canberra every year." – Federal Population Minister Alan Tudge explains the need for an infrastructure overhaul at an MRC lunch in Melbourne today. #auspol pic.twitter.com/Ons4pdV84O

Tudge referred to congestion, “particularly on our roads and transportation systems,” as one of the most pressing challenges for those living in the major cities. He said it has been affecting the daily commutes of local residents, and causing pressure on the roads and public transport networks.

“Overall, the costs of congestion to the economy are already great, and rising steeply,” he said.

This cost is expected to rise to A$40 billion ($28.3 billion) a year by 2030, Tudge said, citing estimates from the Bureau of Infrastructure, Transport and Regional Economics.

“The fact is that 87 percent of all skilled migrants are going to Sydney and Melbourne, and nearly all of the humanitarian intake,” he said in his speech.

Tudge told 7 Sunrise on Oct. 9: “Our overall objective is to get a better distribution of the population growth across the country. If we do that, we take pressure off those big cities that are feeling the congestion at the moment, and we help the economic growth of the smaller states and some of the regional areas.”

He added that some areas in rural Australia are often “crying out for more people.”

Population and Infrastructure Minister Alan Tudge: The Bureau of Infrastructure, Transport and Regional Economics estimate the cost of congestion in Australia's capital cities to be $25bn a year and it's forecast to rise to $40bn by the year 2030.MORE: https://bit.ly/2BuFqi1 #Newsday

There had been a large increase in Australia’s population growth since 2007 under the Rudd government.

“There was a step change increase in population growth from 2007 under the Rudd government, almost entirely driven by lifting the immigration rate. The growth rate for our nation (and particularly our big cities) was well above projections,” Tudge said.

The 2002 Intergenerational Report had predicted that Australia would grow by 2.5 million over the past 15 years—but the growth was about 5 million, outstripping forecasts by 100 percent.

“This mismatch between projections and actual population growth has made it more challenging for governments at all levels to appropriately plan for, and invest early, in the essential infrastructure needed,” Tudge said.

To alleviate the burdens of congestion in the major cities, the Coalition Government is introducing a plan that consists of four parts, which Tudge outlined in his speech Oct. 9.

"Our big cities are suffering more than they should," says Population Minister Alan Tudge. Here is his four-point plan to ease the pressure. #auspol pic.twitter.com/gThogaayfx

Firstly, the government will increase spending in infrastructure for city road and rail networks. In the last budget, the government allocated a record $75 billion with plans for the next 10 years.

The second part of the government’s plan focuses on specific areas of local congestion that have been causing the greatest delays for commuters. In the last budget, $1 billion was allocated for such “local pinch-points,” which are mainly in Sydney, Melbourne, and southeast Queensland.

The third part of the plan focuses on directing skilled migrants to smaller states and regions.

“Matching the skills of new migrants with the skill shortages in rural and regional Australia will be key to the success of this approach,” Tudge said.

The government plans to improve transport between the capital cities and regional areas to support population growth in regional areas.

“If a person in Ballarat, for example, can commute to Melbourne in 45 minutes rather than the present 75, then the opportunities for Ballarat’s growth would accelerate markedly,” Tudge said.

He also said there will be more initiatives to support the growth of regional areas in Australia.

Lastly, the federal government plans to better cooperate with state government to set population objectives for each area to better match population growth with infrastructure expenditure.