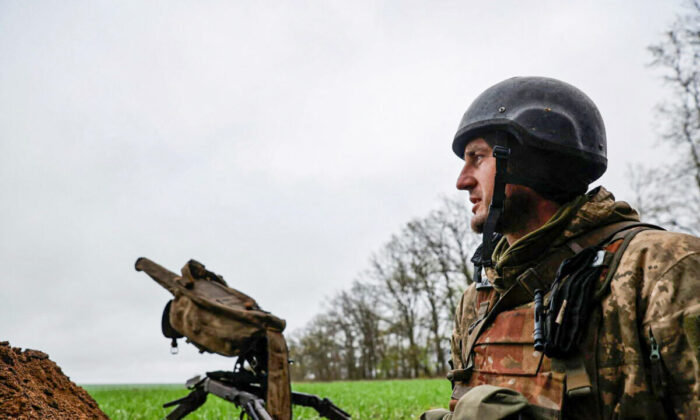 A Ukrainian serviceman stands in a position near Kharkiv, Ukraine, on April 20, 2022. (REUTERS/Serhii Nuzhnenko)
Australia

Australia to Provide Howitzers to Ukraine as Russia Ramps up Offensive

The Australian government has announced it will provide heavy artillery weapons and ammunition to Ukraine’s armed forces as Russia continues its military offensive in the European nation.

The commitment by Australia’s prime minister and defence minister was made while the government is in caretaker mode during its federal elections.

In response to more pleas from Ukrainian officials, Australia will supply a further $26.7 million (US$19.1 million) worth of military assistance, providing six M777 lightweight towed howitzers along with ammunition to bolster the country’s resistance to Russia’s “brutal, unrelenting and illegal” invasion.

“Australia stands with the people of Ukraine and again calls on Russia to cease its unprovoked, unjust and illegal invasion of Ukraine,” said Prime Minister Scott Morrison and Defence Minister Peter Dutton in a joint release on April 27.

Australia will continue to identify opportunities for further military assistance, according to the release.

The decision comes after Ukraine’s ambassador to Australia, Vasyl Myroshnychenko, called on the country to provide further assistance, warning that Russia has the potential to create havoc in the Indo-Pacific.

“We need it all to be able to defend, to defend Ukraine, defend Europe, and defend all the values and freedom and democracy,” Myroshnychenko said.

“We are there in the trenches for you people because … the consequences we’re going to see will be enormous, that [Vladimir Putin] can take another country by force. This is going to create a domino effect all over the world, including here in the Indo-Pacific.”

Meanwhile, Russia has begun to concentrate its attack on southeastern Ukraine.

The BBC reported on April 26 that Russian forces appear to be now concentrating on building a land corridor between Russia, the Russian-backed Ukrainian separatist territories of Donetsk and Luhansk, and the Crimea, which Russia annexed in 2014.

Additionally, Russian Foreign Minister Sergei Lavrov has warned there is a possibility of nuclear conflict in Europe.

Speaking on Russian state television Channel 1 TV, Lavrov, when asked about the possibility of a nuclear confrontation, noted: ” the danger is serious.”

“I would not want to see these risks artificially inflated now when the risks are rather significant,” he said. “The danger is serious, it is real. It should not be underestimated.”

However, he also noted that Russia’s primary position was one where nuclear confrontation should be avoided if possible.

Lavrov also accused Ukraine of provoking Russia by asking NATO to become involved in the conflict to protect the Ukrainian government.

This also adds fuel to the fire,” Lavrov said.