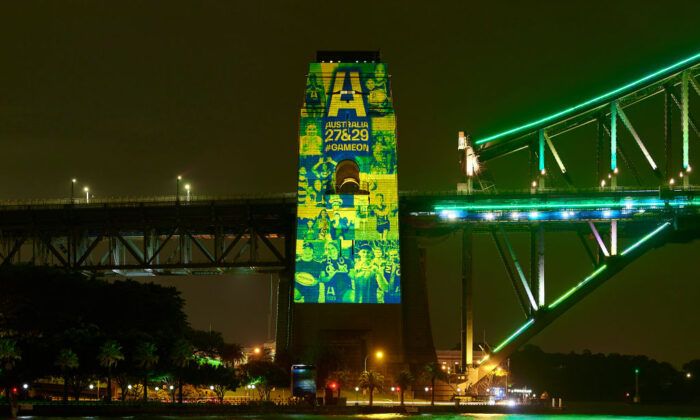 The Sydney Harbour Bridge is lit in support of Rugby Australia's 2027 & 2029 Rugby World Cup Bids, in Sydney, Australia on May 12, 2022. (Photo by Brett Hemmings/Getty Images for Rugby Australia)
Australia

Australia has been chosen to host both the men’s Rugby World Cup in 2027 and the women’s event in 2029.

The announcement came on Thursday, following a vote by the World Rugby Council in Dublin, and means that the men’s tournament will be held down under for the third time, after the inaugural event in 1987 and once again in 2003, while the women’s tournament will grace Australian shores for the first time, Rugby Australia reported.

Chairman of Rugby Australia, Hamish McLennan, said this is a historic day for the game in Australia and was thrilled to welcome two rugby world cups down under.

“It’s a game-changer for rugby in this country, a once-in-a-generation opportunity to revitalise and secure the future of the sport here and see the game we all love to grow and thrive for years to come,” he said.

“I’d like to thank our Federal, and State, and Territory Governments for the belief and support they’ve all shown in Rugby Australia’s bid over the last four years. This is a bid that has received unanimous bipartisan support.

“The shared enthusiasm of our government partners for our vision to bring the Rugby World Cup back to Australia has helped demonstrate that we are a safe pair of hands and ready to welcome the world,” he said.

McLennan went on to thank the Bid Advisory Board and the Bid Team led by Wallaby legend Phil Kearns and Anthony French for their consistent hard work throughout the campaign.

Kearns, who played 67 matches for the Wallabies (Australia) between 1989 and 1999, and was a member of the 1991 World Cup-winning Australian side, said the Bid Team connected with hundreds of thousands of Australians during the bid campaign, people who are passionate about the game.

“Today is just a reward for the hard work and support they give to the game on a daily basis,” he said.

“Rugby World Cup is coming home to Australia in 2027 and 2029. We are all committed to make the most of this golden opportunity.

“This is also a significant moment for our neighbours in the Pacific, and we want it to be embraced and treated as a home for the world cup by players and fans in the region,” he said.

Wallaroos (Australia) captain Shannon Parry was excited about what this announcement for 2029, plus the Commonwealth Games in 2026 and Olympics in 2032, will do for Australian women’s rugby.

“I think it’s a massive pathway and trajectory to get girls into rugby, and it’s really exciting,” she told Fox Sports.

“If you’re a youngster, 15, 16, come five, six, seven years’ time, you’re probably going to be in that Wallaroos team, so it’s something really exciting, and it’s really important for our current crop of Wallaroos to create that pathway and be those role models these youngsters can look up to.”