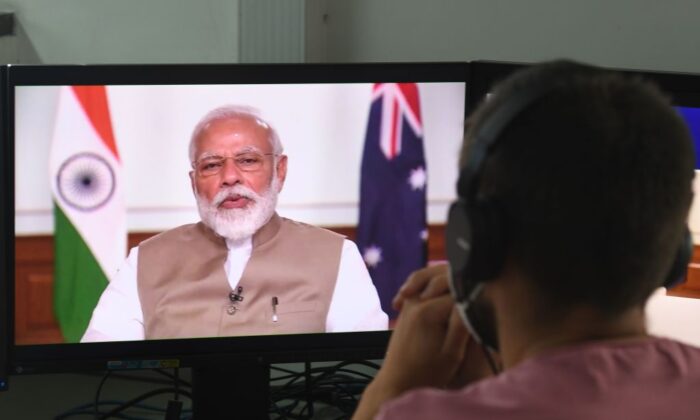 A man wearing a face-mask watches on a monitor Indian Prime Minister Narendra Modi speak during a bilateral virtual summit with Australian Prime Minister Scott Morrison, at an office in New Delhi on June 4, 2020. (Prakash Singh/AFP via Getty Images)
Australia

Australia Steps up Relationship With India

Prime Minister Scott Morrison and India’s Narendra Modi have agreed to increase co-operation between the two countries through a stronger formal relationship during a virtual summit of their leaders.

Prime Minister Scott Morrison said stepping up the relationship would build trust even further between the nations.

“In a time like this, we want to deal very much with friends and trusted partners, and this is a partnership which has stood the test time and again,” he told his Indian counterpart Narendra Modi via videolink on Thursday.

“We share a vision for open, free, rules-based multilateral systems in our region, whether that’s in the health area or it’s in trade or in other places.”

Modi later said it was an outstanding discussion, describing Morrison as a dear friend.

“With [the] comprehensive strategic partnership between India and Australia, we aspire to achieve yet new heights in our collaboration,” he said.

Australia will throw $15 million behind an India-Australia research collaboration fund, plus another $4.5 million to support work by Commonwealth Scientific and Industrial Research Organisation (CSIRO) to reduce plastics waste.

The fund would see grants of up to $600,000 go to Australian and Indian research projects with the Indian government to make matching contributions.

“Strengthening that relationship through a shared commitment to science and technology will only serve to benefit both our nations,” she said.

Foreign Minister Marise Payne welcomed the signing of the maritime pact, which included combating the smuggling of people, guns and drugs.

It would also see the Australian and Indian navies working together.

Morrison joked about the personal relationship between the leaders, built via social media exchanges about curries.

“I wish I could be there for what has become the famous Modi hug and to be able to share my samosas,” he said.

“Next time, it will have to be the Gujarati kashti, which I know is a keen favourite of yours that you’ve mentioned to me before. I’ll try that out in the kitchen before next time we meet in person.”

The only other comprehensive strategic partnerships Australia has are with China, Indonesia and Singapore.

A trade deal between the two countries has been stalled for several years.

Morrison noted the trade and investment flows were not where he or Modi would like them to be but he hoped they would now grow faster.

Morrison was scheduled to travel to India in January but postponed the trip to deal with the bushfires, then the Chinese Communist Party (CCP) virus, commonly known as the novel coronavirus, pandemic halted international movements.

By Katina Curtis and Finbar O’Mallon