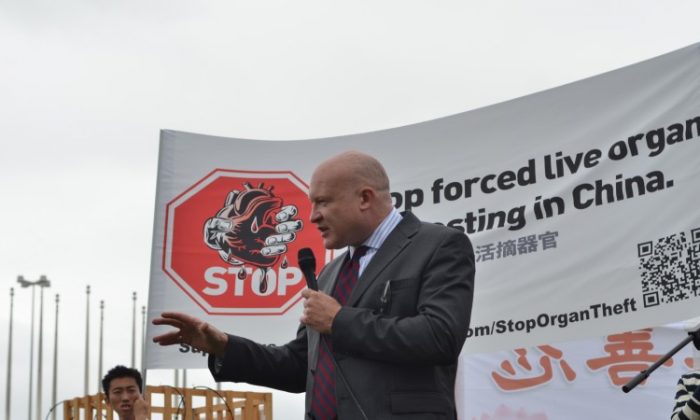 Australians travelling to China for quick transplant surgeries are likely to receive organs from executed prisoners and it is up to the Government to be more proactive in addressing the risks.

Mr Ethan Gutmann, renowned UK-based author and investigative researcher, gave evidence on organ harvesting before members of parliament in a private briefing on Nov 28. He also presented before the Department of Foreign Affairs and Trade (DFAT) parliamentary private committee on Nov 29.

“The Australian Government should take the lead on this issue, which has the potential to affect unknowing Australians seeking urgent organ donors,” said Mr Gutmann.

“China is on Australia’s doorstep, its biggest trading partner. This is a moral question. How can you conduct a relationship when a country is involved in such unethical behaviour?” he asked.

Mr Gutmann has been collecting evidence on transplant abuse in China since 2006. His research involved interviews with over 100 eye witnesses, including labour camp survivors, who reported receiving systematic medical testing conducted only in cases of organ checks for transplant purposes.

He has also interviewed a former doctor who testified to harvesting organs from live prisoners in China’s northern region, home to the persecuted Muslim Uyghur minority. Removal of organs from a victim who is not brain dead ensures a lower risk of tissue rejection in the receiver, at the cost of the victim’s life.

He called for the Australian Government to enact laws that would make it illegal for pharmaceutical companies to conduct transplant clinical trials in China. He also suggested immigration entry cards should include a question about whether travellers have received a transplant in high-risk countries like China, India or Philippines.

“These are small non-confrontational steps the Government can take, yet send a strong message,” Mr Gutman said.

Sydney University professor and doctor, Maria Fiatarone Singh, also spoke at the Canberra briefing. She is a contributor to the book State Organs: Transplant Abuse in China, co-written with Mr Gutmann.

Dr Fiatarone Singh stressed the importance of collecting more data from Australian hospitals and other institutions on how many citizens have travelled to receive quick transplants overseas, especially in China.

“We have no idea how many have travelled to receive these unethical operations. The public must be informed of the risks and the Government should take a bigger role in collecting this data,” said Dr Fiatarone Singh.

An article in the 2005 issue of the Medical Journal of Australia titled “Outcome of overseas commercial kidney transplantation: an Australian perspective” provides limited data on the issue.
The data lists 16 patients who were seen at Sydney’s St George area hospitals after receiving kidney transplants overseas. These included surgeries performed in India, Iraq, the Philippines and China.

The data lists transplant operations performed between 1990 and 2004. Seven out of the 16 cases were in China. The article warned that overseas organ transplants carry significant risks of HIV, Hepatitis and rejection.

Mr Gutmann tells the story of prolific state-run organ harvesting in China. According to his investigations, willing organ donation is virtually non-existent. Instead, the military hospitals, labour camps and prisons have become sites for en masse killing-on-demand facilities.

The key targets are prisoners of conscience, detained for their beliefs or civil actions, which were deemed illegal by the Chinese regime. Among these are Uyghurs, Tibetans, House Christians, democracy activists and Falun Gong practitioners.

Falun Gong practitioners comprise the majority of the donor pool, says Mr Gutmann. His research has suggested at least 65,000 practitioners of the spiritual discipline have been subjected to organ harvesting between 2000 and 2008.