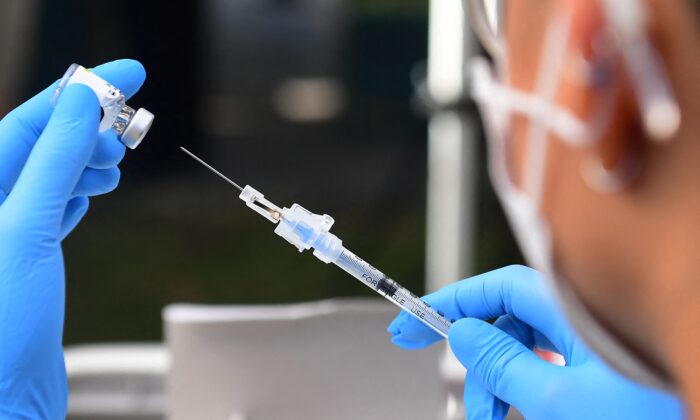 The Pfizer COVID-19 vaccine is prepared for administration at a vaccination clinic on Sept. 22, 2021. (Frederic J. Brown/AFP via Getty Images)
Australia

Australia Prepared to Vaccinate Children Under 12

The Australian government says it will be ready to provide Pfizer vaccinations to children younger than 12 once they receive approval from the TGA.

Pfizer has sought emergency approval with the FDA in the U.S. to administer a lower dose to children aged between 5 and 11 following successful trials.

The Australian government, since September, have encouraged Pfizer to apply to the TGA for approval to vaccinate children as young as 5.

Australian Defence Minister Peter Dutton said that the decision made to vaccinate under-12s is not political.

“We have the TGA (Therapeutic Goods Administration) and all sorts of approval processes,” he said on the Nine Network on Friday.

“They don’t approve vaccines without the most rigorous testing, and we should take heart from that.”

“If they approve it, then the government will act on that straight away, but it’s a decision for the scientists.”

Dutton also noted that evidence showed COVID-19 did not affect children the same way as adults.

Indeed in the most recent report (pdf) released by the National Centre for Immunisation Research and Surveillance (NCIRS) indicated that despite the greater virulence and infectiousness of the Delta strain, 98 percent of the reported cases of infected children aged 0 to 18 from Jun 16 to Aug 19 were asymptomatic or had a mild case of disease.

However, TGA’s studies on Pfizer vaccines indicate that young adults younger or equal to 19 years of age have the highest risk of myocarditis-like cases after vaccination.

Until Sep 26, this age group had a rate of 1.4 myocarditis-like cases per 100,000 doses of Pfizer vaccine as compared to 0.8 and lower in all other age ranges.

TGA’s most recent report on Oct 7 confirmed that ongoing analysis of Australian data with Pfizer indicates that there is a “higher-than-expected number of cases of myocarditis in vaccinated compared to unvaccinated individuals.”

Furthermore, the cases are more common in teenage boys after the second dose. These findings concur with other overseas drug regulators. However, TGA stated that myocarditis-like cases are usually short-lasting and resolved after treatment and rest.

Meanwhile, Queensland and Western Australia have been urged to boost increase their vaccination rates; the two states were the last two states to reach the 50 percent vaccination thresholds for over-16s.

Dutton said COVID-free parts of Australia could not stay in lockdown indefinitely.

Infectious disease physician Katherine Gibney from the Doherty Institute said states like Queensland not opening up their borders until higher vaccine thresholds were met made sense.

Additionally, she noted double-dose vaccine targets of 70 and 80 percent are reasonable targets for states and territories to begin the reopening process.

Nationally, nearly 60 per cent of over-16s are fully vaccinated.