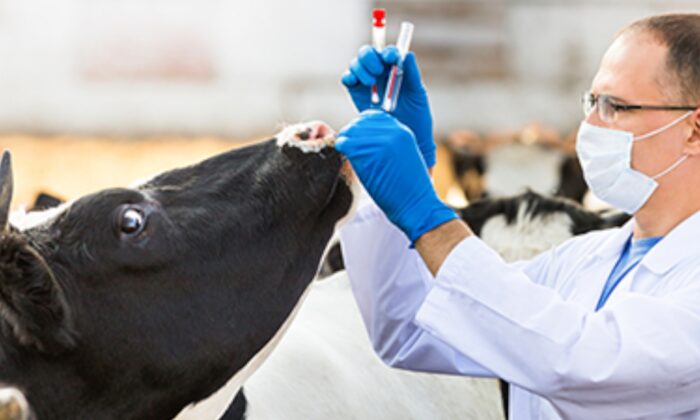 A foot-and-mouth disease outbreak in Australia would trigger export bans and have severe economic consequences for Australia’s livestock producers. (Australia's Department of Agriculture, Water and the Environment)
Australia

A portable molecular lab that will be used to detect exotic animal diseases and biosecurity threats has opened in Timor-Leste following a seven-year joint project between Australia and the Timorese government.

Created in partnership between Agriculture Victoria and Timor-Leste’s Ministry of Agriculture and Fisheries, the purpose-built lab aims to equip Timorese vets with resources to sample suspect animals and provide a diagnosis before the disease can spread.

A portable molecular lab developed by AgVic was opened today in Timor-Leste.

Supported by AgVic researchers and @dfat it will help quickly diagnose and detect animal diseases, providing an early warning of threats to Australian agriculture.@of_leste #biosecurity pic.twitter.com/YDV7Kg2wi6

“Biosecurity is becoming of increasing concern about our countries given that global spread of diseases such as African Swine Fever (ASF), Foot and Mouth Disease (FMD), and Lumpy Skin Disease (LSD),” Costello said on June 17, reported Tatoli news.

“I am glad that the Australian government has been able to support Timor-Leste in its response to ASF (African Swine Flu) through the program developed by Agriculture Victoria,” Costello said, adding that the AU$1.3 million (US$897.6 million) project that was funded by Australia’s Department of Foreign Affairs and Trade will be delivered between 2022 and 2023.

Agriculture Victoria research director Brendan Rodoni said the project was also providing a valuable first-hand experience for Victorian scientists in diagnosing diseases that are not found in Australia.

“This helps us to build skills and capacity in exotic disease surveillance and diagnosis, so we are better prepared if there was an outbreak in Australia,” Rodoni said in a statement.

Grant Rawlin, Agriculture Victoria researcher and professor, added that the molecular lab will utilise the test called a qPCR—meaning real-time polymerase chain reaction that monitors targeted DNA molecules—which can be used to test “any viruses or bacteria causing diseases in animals.”

Concerns About Biosecurity in Australia

Vice President of the National Farmers Federation, David Jochinke, said currently, Australia’s livestock and support sectors are working hard to prevent the possible incursion of Foot and Mouth Disease and/or Lumpy Skin Disease, which have been detected in Indonesian cattle.

“Government and industry are supporting our regional neighbours in the containment of both diseases and in the safeguarding our sector should there be an incursion on home soil,” Jochinke said in a message to new Agriculture, Fisheries and Forestry Minister, Senator Murray Watt at the first industry Ministerial roundtable in Canberra on June 21.

“Biosecurity isn’t a catchy word, but it’s an issue all Australians have a vested interest in. Significant incursions will not just impact agricultural value chains and market access, but will have an impact across the whole economy,” Jochinke added.

“We need to do better than tackling problems at the point of crisis. We must finalise the National Biosecurity Strategy and deliver the investment required to strengthen our system,” Jochinke said.

“All of the discussions I had relating to agriculture with members of the sector even before I took on the portfolio, biosecurity always rated very highly as a priority,” Watt said.

But when asked whether federal Labor would provide new funding for biosecurity, Watt said that “we haven’t committed to do that at this stage.”

“[O]bviously that’s something I’d need to talk about with my Ministerial colleagues, but it’s very clear to me that this is a huge threat to our industry.”

Foot and mouth disease (FMD) is a highly contagious viral disease of livestock, causing fever followed by the development of vesicles (blisters) chiefly in the mouth and on the feet, often affecting cloven-hoofed animals such as cattle, buffalo, sheep and goats.

Currently, Australia is free from FMD, according to a government statement.

In May 2022, an outbreak of the virus was reported in cattle in Indonesia.

In 2001, a Foot and Mouth Disease outbreak in the UK caused losses of more than 8 billion pounds ($AU19 billion).

Australian Bureau of Agricultural and Resource Economics and Sciences (ABARES) modelling projects a widespread FMD outbreak in Australia would have an estimated direct economic impact of around $80 billion.