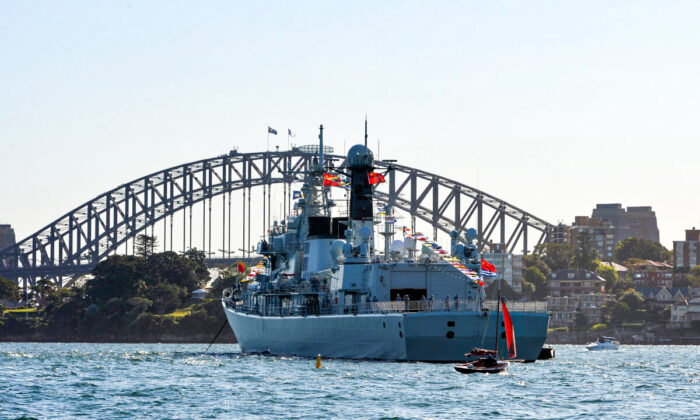 A Chinese warship docks in front of the Sydney Harbour Bridge on Oct. 4, 2013. (SAEED KHAN/AFP via Getty Images)
Viewpoints

Australia Needs to Get Smart About China

It’s 1985, and somewhere in the calm waters of South-East Asia, an Australian submarine slips beneath the surface on a moonless night. Its presence and disappearance go unnoticed as it was business as usual for the world on both sides of the iron curtain.

Upon reflection, it was a time of peace and certainty. The world order was crystal clear. At that time, Australia had not been at war since withdrawing from Vietnam, so the Cold War era post-1973 can be seen as a relatively stable period in Australia’s military history.

This all changed within a snapshot of time after the Berlin wall was reduced to rubble in 1989. The Cold War was over, but a new threat emerged in the Middle East, and Australia was once again at war on foreign soil.

It can be argued that Australia’s security interests were no more at risk during the Cold War in the mid-80s than they are now in 2022, despite China’s imminent presence in the Solomon Islands, 1745 kilometres (1080 miles) from Cairns.

If we look to the left, we find that China has increased its cultural and economic presence in Indonesia. In fact, it is anticipated that Beijing will play a key role in the establishment of Indonesia’s new capital city, Nusantara, to be located in East Kalimantan on the island of Borneo, 2117 kilometres (1300 miles) from Darwin.

Some government critics have labelled the new capital city “New Beijing,” noting that China has reportedly built a large cement plant on the site. Yet few Australians would be concerned or even aware of this development.

Perpetuating the idea of a Cold War with Beijing feeds the hunger of realists in the national security space. It justifies their existence and forms the basis of their arguments that fuels the spiralling of increased military spending in Australia and in the region.

The focus should be on smart power, developing a military capability fit for purpose, developing enhanced intelligence capabilities and maintaining good diplomatic relations.

Our intelligence agencies knew at least a decade ago that the Chinese regime would seek to establish a presence in our region. We watched them build their military presence in the South China Sea, and although we were critical of it, China forged ahead without major disruption. Academics were particularly concerned, evidenced by the multitude of research papers published on the topic.

Now, Beijing has sealed a pact with the Solomon Islands. A deal that the Solomon Islands government felt would improve the nation’s security and economic interests, one that more than likely outweighed anything Australia could offer. This arrangement is not unlike those that Beijing has made with other nations in our region.

The political rhetoric of this being a failure of foreign policy on Australia’s part is a distortion of recent history. Note that this has not been labelled an intelligence failure. Why? Because it does not come as a surprise to anyone on both sides of parliament.

Opportunistic rhetoric entrenching notions of a Cold War with China during an election period is an irresistible vote magnet.

Yet alarmist statements do little but compound anxiety experienced by the Australian community as we emerge from the pandemic and helplessly watch horrific scenes of the human tragedy unfold in Ukraine.

It also does nothing to improve relations diplomatic relations with our regional neighbours, which have become increasingly awkward as they continue to prosper from Chinese investment.

There is no strategic advantage to entering a Cold War with China. Instead, we should take the opportunity to rise to the challenge of becoming more economically competitive in our region while maintaining good diplomatic relations with our neighbours. Using smart power and investing in our intelligence capabilities is a much better option than putting one’s head in the lion’s mouth. We need to get smart about China.

Dave Gilbert
Follow
Dave Gilbert is an Australian Values Party Senate candidate for NSW. He is a Navy veteran who served on Australian submarines during the Cold War as an intelligence analyst. He is also a lawyer and holds a Ph.D. in electronic surveillance and Australia’s national security language capability.