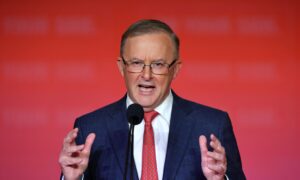 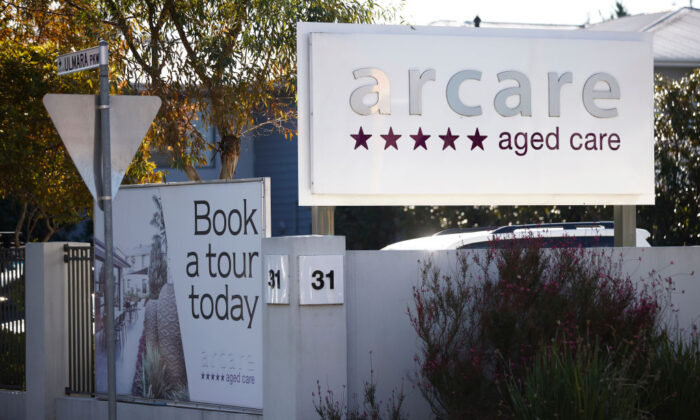 Signage is seen at Arcare aged care facility in Maidstone, where a worker has tested positive to COVID19 on May 30, 2021 in Melbourne, Australia. (Daniel Pockett/Getty Images)
Australia

The Australian government, along with its state and territory governments, have agreed to an “in-principle disposition” to move towards mandatory vaccinations against the CCP virus for aged care and disability support workers, seeking advice from medical experts on a safe way to do this.

“For vaccinations to be made mandatory for aged care workers, that has to be done by public health orders at a state level,” Prime Minister Scott Morrison told reporters after a national cabinet meeting on Friday.

The prime minister urged aged care and disability support workers to “go and get that vaccination” at one of the “numerous points of presence” in the community.

Health Minister Greg Hunt said there were five options for aged care workers to get vaccinated, which are in-house at aged care facilities, at roving clinics, through their GP, at Commonwealth clinics, or at state clinics.

Vaccinating aged care residents and front line workers have been a high priority for the government, which is why, despite a slower than expected rollout of vaccinations, they have been the first to get access to vaccines.

“That is why, both through the Commonwealth and the states and territory governments, priority is being afforded to those workers to get vaccinated at the many points of presence that are available to them,” Morrison said.

“That includes fast lanes, green lanes, priority lanes, that are been put in place by states and territories, as well as through the GP program for them to have priority on appointments.”

In May, a Queensland nurses union reported the results of an internal survey that revealed strong hesitancy amongst some nurses to a mandatory vaccination policy given the shorter trial times and higher unknowns for the newer RNA vaccines compared to standard vaccines.

But the prime minister said the “in-principle disposition” meant that both the federal and state and territory governments were on board for mandatory vaccinations of aged care and disability support workers.

“We’re leaning heavily into this. Make no mistake,” Morrison said.

“We are leaning heavily into this as leaders of governments and myself as prime minister, to see us move towards a mandatory vaccination for aged care workers.”

Morrison has tasked the AHPPC to advise National Cabinet about the safest way to achieve mandatory vaccinations for aged care workers. The National Cabinet is a special cabinet of all state and territory premiers and chief ministers, chaired by the prime minister. It was last convened during World War II and was reformed during the CCP (Chinese Communist Party) virus pandemic.