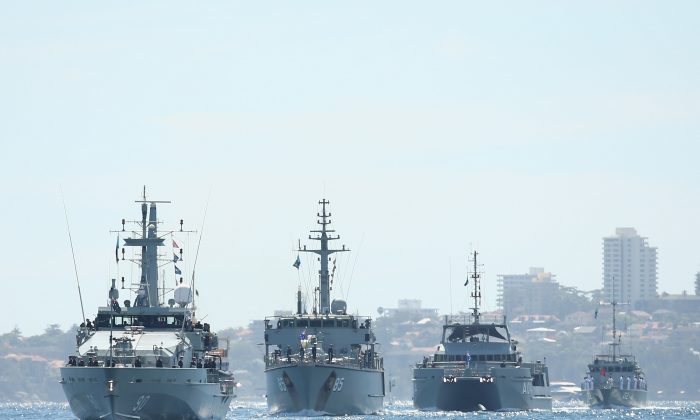 Australia May Not Be Prepared for North-East Asia Conflicts

First part of our interview with Professor Desmond Ball, one of Australia's top security analysts
By Shar Adams

CANBERRA—Desmond Ball has spent over a quarter of a century as a special professor at the Australian National University’s Strategic and Defence Studies Centre. For Professor Ball, the recent Australian deployment of air power and military personnel to northern Iraq represents a familiar scenario – the Middle East has once again become a distraction from what is needed to defend Australian shores.

“We go through processes [for Australia’s defence] … and then they get short circuited because we respond to the war on terror, or Afghanistan or Iraq,” he said. “We end up with a force structure which is totally ad hoc.”

With limited resources, the fear is that Australia is spreading itself too thin to meet the demands of homeland defence.

Billions of defence dollars have been spent on supporting the United States in Iraq and Afghanistan, including on heavy equipment like Abrams battle tanks and C17 transport aircraft. This weaponry may be suitable for warfare in the Middle East, but defending Australia in the event of a North-East Asia conflict requires a different force structure, he said.

The “sea air gap” to the north of Australia is a critical area for Australian defence. Effectively protecting the area would require a specific set of air and sea forces, including a new generation of submarines and, according to Professor Ball, at least 100 fighter jets—neither of which Australia presently owns.

The Federal Government has pledged $24 billion to buy and deploy 72 of F-35 Joint Strike Fighters (JSF), which are “far and away” the best fighter jet available, Professor Ball says. “The electronics, the stealth design, the whole engineering” have never been done before.

Production of the F-35 is way behind schedule, however, and continues to meet delays and cost blow outs. The first F-35 is due for delivery to the Royal Australian Air Force later this year but it will be years before the full quota is reached.

The Government is also set to replace Australia’s Collins-class submarine boats after the Abbott Government made an election promise to build 12 submarines in Adelaide. However, progress has been slow, with the Australian Senate Inquiry into naval shipbuilding and the submarines only now receiving submissions. The inquiry is not due to report back to the Government until next year.

Last month it was revealed the Government was looking at purchasing Japanese Soryu-class submarines, which could threaten Australia’s naval shipbuilding industry.

Steering clear of the political fracas, Professor Ball said Japanese submarine propulsion technology was “probably the best”, but warned that buying a design from overseas and modifying it for Australian use would be costly.

While Professor Ball is supportive of the US-Australia alliance and indeed spent much of his early career, in the 1970s and 1980s, working in the United States. He is concerned, however, that Australia has become too reliant on the US.

Australia has lost the ability to think and plan independently, he says, and in that respect no longer offers what a good friend can and should to the US.

“For the last decade and a half when the Americans ask for something, we just put our hands up,” he said.

“We don’t go through those processes anymore, to find out where our interests might vary, where we think the Americans are going down the wrong track and telling them.”

The concern is not only about planning and policy, but also about military resources.

Professor Ball has been arguing for a greater focus on Australia’s defence needs for decades and there are indications his concerns may be hitting home.

During a visit to Australia last month, Dr Ely Ratner of the Center for a New American Security (CNAS) in Washington, DC, expected enthusiasm about Australia’s growing role on the world stage.

In an opinion piece for the Lowy Institute, Dr Ratner said Prime Minister Tony Abbott’s “globalist reflexes” had been noted in Washington. He pointed to Australia’s leadership on search efforts for the MH370, at the UN over the MH17 tragedy, and its commitment of police and military deployment to Ukraine, Afghanistan and northern Iraq.

After a week of discussion with Australian defence experts and foreign affairs officials, Dr Ratner says it was “easy to detect a budding sense of unease among Australia’s strategic community”.

There were concerns Australia may be “spreading itself too thin” with its limited resources and may be leaving the Australian homeland vulnerable.

Professor Ball says it is the responsibility of every government to protect its own people and, right now, Australia’s ability to do that is under question.

The arms race in North-East Asia between China, Japan, both Koreas and Taiwan is heating up, and without checks and balances to hinder escalation, a miscalculation or misunderstanding could quickly lead to a catastrophic outcome.

Of the worst case scenario, Professor Ball said: “Start imagining hundreds of millions of people on the move, getting out of North-East Asia.”

He worries that time is running out for Australia to gain its submarines and strike fighters and to get its force structure into shape.

“We are going through a period of relative frailty between now and when they start coming online,” said Professor Ball. “If things start going wrong in North East Asia, we are not going to be in a happy situation.”